[Update] Williamsburg's Videology Is Closing This Month After Nearly 15 Years

Videology, the beloved Williamsburg-based bar/screening room/movie rental store, has announced that it will be closing down before the end of the month, marking another end of an era for the turbulent neighborhood.

After almost 15 amazing years, Videology will be closing its doors for the last time on October 27th. Thank you so much to all of our loyal and passionate customers. We couldn't have done it without you!

On Facebook, they wrote: "After almost 15 amazing years, Videology will be closing its doors for the last time on October 27th. Bringing movies to Williamsburg, to Brooklyn, and to New York City, first as a DVD rental store, and then as a bar and theater, has been a tremendous honor. Thank you so much to all of our loyal and passionate customers. We couldn't have done it without you! We've got some great events still coming up, so please join us over the next two weeks as we celebrate Videology!"

Videology opened almost 15 years ago as a video rental store on South 1st Street and Bedford Avenue by Wendy Chamberlain, a film major and database programmer by trade, and James Leet, an architect. By 2012, with video stores dying out due to the rise of Netflix, it pivoted to become a gathering place for film buffs to screen movies, hold trivia events, and enjoy drinks together—though they still rented a small selection of DVDs.

Forrest Cardamenis, who worked at Videology as a film and events programmer there for the past two years, told Gothamist he was not at liberty to discuss the reason for the closure, but said it was unrelated to last year's lawsuit.

Reached by phone, Videology's Creative Director Madeleine Tangney said, "After 15 years of business, they've decided to move onto different career endeavors. There's not as much of a backstory as people are expecting." 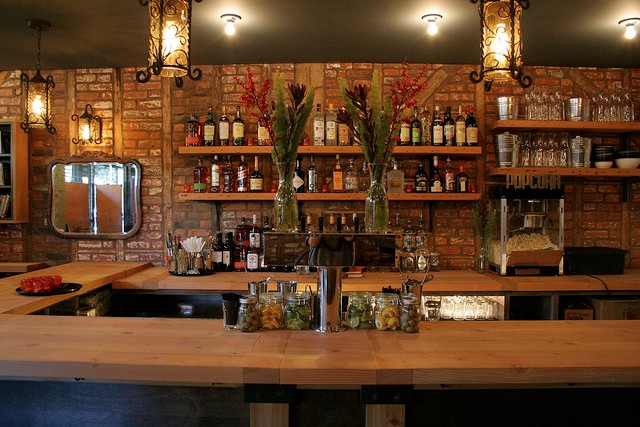 Cardamenis said he will miss the community that Videology cultivated. "Just the past hour or so, I've gotten emails, DMs, and tweets from so many people telling me what Videology meant to them, whether it was a place just to hang out and watch (or rent) movies or a place where they met their future spouse," he told Gothamist. "It's great to hear that—it shows that we did something that really mattered to people."

He continued, "Speaking for myself, I found out about it through Film Twitter people buzzing about their movie trivia nights, and I quickly began going there with my college friends. We went every week for a while, and intermittently thereafter. I met a lot of great people there, either as coworkers or socially, and it was my first job in the film world. That it paid well enough for me to live comfortably and afford vacations is something of a miracle. I’ll miss that, for sure."

Videology still has two weeks of events planned before it exits stage left—that includes their regular Movie Trivia night the next two Tuesdays, and lots of Halloween-themed events like Stranger Things bingo, a Sweeney Todd singalong, a Beetlejuice drinking game, a live scoring of 1922 vampire horror film classic Nosferatu, and a Simpsons "Treehouse Of Horror" bingo night. The last scheduled events as of now include a screening of Hocus Pocus on Friday Oct. 26th, and a Suspiria party/series of screenings all day on Saturday Oct. 27th.

Update: Videology co-owner James Leet told Gothamist that the closure has nothing to do with the business or rising rents or anything like that—he and his partner Chamberlain were just ready to move on.

"Basically, it's what we said in our post on Facebook this morning," he said. "My partner and I feel we've had a strong 15 year run, we've had overwhelming support from Williamsburg and the greater NYC, and we really appreciate and feel very lucky about that. We've had a lot of people who are very loyal, who have a strong passion for film, and who have reached out to us and become our friends. We feel very lucky about that. It just feels like it's the right time to pursue other opportunities."

He said he would be re-focusing on architecture, while Chamberlain had accepted a position at on demand streaming company; he added that they would be relocating, but didn't specify whether that meant they were leaving the city. They considered passing the business along to someone else, but ultimately decided against it. He also doesn't know what might be moving into the space after they leave.

#closure
#film
#movies
#videology
#williamsburg
Do you know the scoop? Comment below or Send us a Tip