Update: The Gutter Declared Safe For Bowling And Fun

[Update: The Department of Health has given the all-clear for The Gutter to reopen!] Williamsburg's beloved bowling alley and music venue, The Gutter, closed yesterday after it was revealed the NYC doctor who tested positive for Ebola had been there on Wednesday night. The Gutter issued a statement this morning:

"We voluntarily decided to close The Gutter yesterday evening as a precautionary measure while we gathered more information. We are working with the NYC Health Department to have the bar cleaned and sanitized under their supervision and expect to be open sometime today after that is completed. Doctors advising the Health Department have told us that our staff and customers were at no risk."

A CMJ show scheduled for Thursday at The Gutter was canceled and Gimme Tinnitus announced last night that its Friday (10/24) show was also canceled (it's unclear if they will try to rebook tonight).

City officials have emphasized that the Ebola patient, Dr. Craig Spencer, was not ill when he went out on Wednesday (besides going to The Gutter, he went to the High Line; ate at The Meatball Shop; took the 1, A and L trains; took an Uber) and that Ebola is not airborne. NYC Health Commissioner Dr. Mary Bassett said, "People with Ebola are contagious when they are sick, and what's contagious about them are body fluids." The NY Times also explained it's extremely unlikely one would get Ebola from a bowling ball.

On @NY1: @RogerClark41 and I just invited the mayor and governor to join us on our next bowling night at @TheGutter.

Update: Dr. Don Weiss of the Health Department said during a press conference outside The Gutter, "We came to see that there was no exposure — meaning there was no bodily fluids that were here. We confirmed that. The place can reopen and we hope that people will come back." He said of The Gutter, "They’ve been cooperating fully." 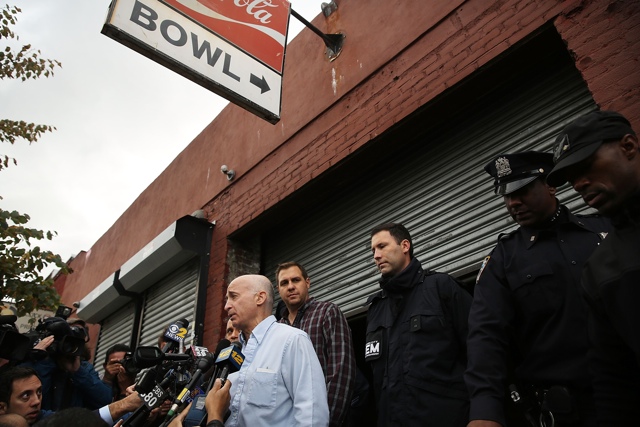 Outside The Gutter today (Getty Images)

The Gutter’s owner, Todd Powers, said he would take the extra step of thoroughly cleaning and sanitizing the Gutter. “Once that’s taken care of, we’ll open the doors to the public and we hope the mayor and governor come down and bowl,” he said. Mr. Powers did not specify when the cleaning crew would come or when the Gutter would reopen.