Did you know that surfing was illegal in New York City until 2005? And even then, it was only made legal on one stretch of Rockaway Beach (in 2007, more of the beach was opened up to the sport). And now it seems the city is tightening back up on their beach rules—while your surf boards are safe, anyone with a boogie board is now banned from entering NYC waters. 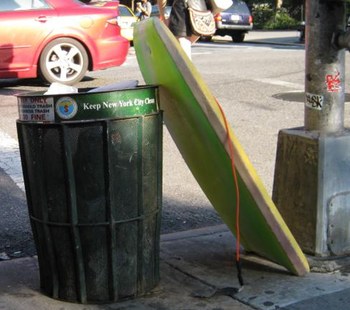 According to the Rockaway Times, "For the first time in history, an ocean facing international city has banned the outright use of boogie boards." The ban was placed on all New York City beaches, an official directive that came down from Jill Weber on August 6th, according to the paper. We reached out for further explanation on the ban, and will update when we hear back.

One long time boogie boarder, Jose De la Rosa, told us this morning, "This is absurd, I've been doing the sport for 20 years, going to different beaches around the world and I can't believe I can't even do it where I live."

The ban seems to be based on their ban of flotation devices—another local and member of the Rockaway Beach Civic Association, Beth Perkins, explains, "From what i understand, there were two young kids who got swept out on their boogie boards down around Beach 33rd during Bertha. Their reasoning is that the boogie boards are a crutch for kids /people that don't know how to swim and therefore they get themselves into trouble with them. They are drawing on a parks rule that outlaws 'floatation devices' which is very frustrating because it's so vague that they can manipulate the rule at their ridiculous whims."

There's currently a letter campaign that was started by the Rockaway Beach Surfers Association, who are trying to get the ban lifted. They propose that "all surfing items (surfboards, planers, boogie boards, fins, stand up paddles) be allowed on the surfing beaches and anything under 48" without skegs be allowed on the swimming beaches."

UPDATE, 1 p.m.: This afternoon, at least one kid (pictured below) was spotted boogie boarding in Rockaway. He told us he knew about the ban "but the lifeguard said I could do it until his boss came." 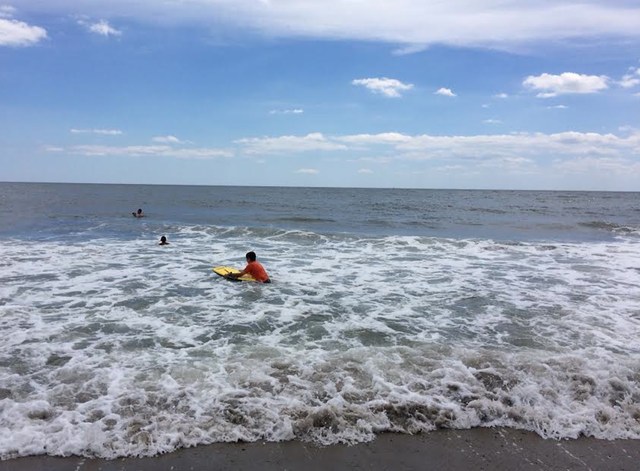 UPDATE, 3:30 p.m.: The Parks Department tells us that "Boogie boards will be allowed in open sections of beaches through Labor Day, as long as they do not create an unsafe condition. As always, beachgoers are prohibited from entering the water at any closed sections of the beaches. We will review the use of boogie boards at our beaches after the summer."