[UPDATE BELOW] Yesterday Comedy Central announced that relatively unknown standup comedian Trevor Noah would replace Jon Stewart as host of The Daily Show. The NY Times appears to have gotten the exclusive, and they paired their report with a look at the incoming host's social media presence, which the paper described as "earnest." We're guessing the Times style guide defines "earnest" as "cringe-worthy jokes about Jews and 'fat chicks,'" because in the past 24 hours, a backlash against Noah has been sparked by a number of old tweets the Times apparently missed, such as these regrettable wisecracks, via The Guardian: 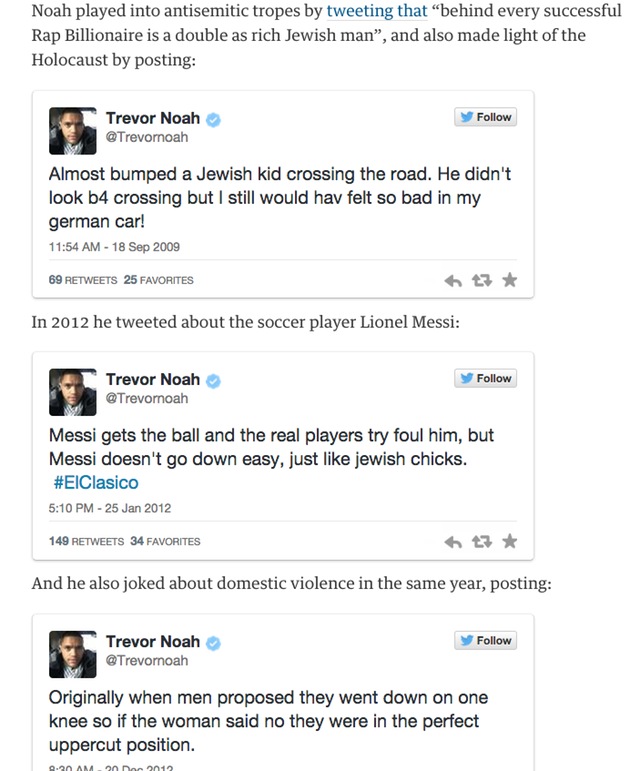 These are also pretty bad:

A hot white woman with ass is like a unicorn. Even if you do see one, you'll probably never get to ride it.

So she gets fat? RT @missdanibagel: When a woman is loved correctly, she becomes 10 times the woman she was before

Comedy Central has thus far declined to comment. Noah responded to the rising chorus of condemnation by tweeting, "Twitter does not have enough characters to respond to all the characters on Twitter." This tweet has since been deleted, but the anti-Semitic and misogynistic tweets remain.

Today the Times reports, "... the controversy over Mr. Noah’s tweets poses a challenge for Comedy Central and its prestige late-night comedy show. And it raises the question of why his Twitter account was not more carefully vetted before he was named host of 'The Daily Show,' a late-night show with a worldwide audience of fans as well as detractors."

Update 3:20 p.m.: The Daily Show has issued a statement defending Noah. “Like many comedians, Trevor Noah pushes boundaries; he is provocative and spares no one, himself included,” the Comedy Central statement reads. “To judge him or his comedy based on a handful of jokes is unfair. Trevor is a talented comedian with a bright future at Comedy Central.”

#comedy central
#outrage machine
#social media
#the daily show
#trevor noah
#twitter
Do you know the scoop? Comment below or Send us a Tip