Gothamist reviewed audio of the start of C.K.'s set, which started around midnight Sunday, in which any boos or gasps of recognition in the audience were drowned out by the cheers and clapping. Two people did walk out of the set, a source told Gothamist, and as per the Comedy Cellar's new house policy, their checks were on the house.

A source told Page Six, "He didn’t address [the #MeToo allegations against him]. He was a little arrogant … he made some comment like, ‘I’ve been off for a while, ‘cause everyone needs a break.'"

Another person in attendance tweeted, "I saw Louis CK at the Comedy Cellar last night, and I’m happy to report that his new material is just as bad as the old." Another added:

Louis CK did another surprise drop-in set last night in NYC. Guess he hasn't been watching the Kavanaugh hearings during his "time out"

In the wake of the C.K. incident and backlash, Comedy Cellar owner Noam Dworman told HuffPost the Cellar was going to institute a new policy: "Essentially 'swim at your own risk.' We don’t know who may pop in that’s not on the lineup. If someone does come in that you don’t want to see, you are free to leave, no questions asked and check completely on the house," he said. "Having said that, we don’t expect Louis back anytime soon."

Update: An person who was in the audience described more details of CK's set to us. They said that in addition to getting an email earlier in the day stating the "swim at your own risk" policy, the show's emcee made some similar comments in person before CK went up, reminding the audience that they could leave if they were uncomfortable. 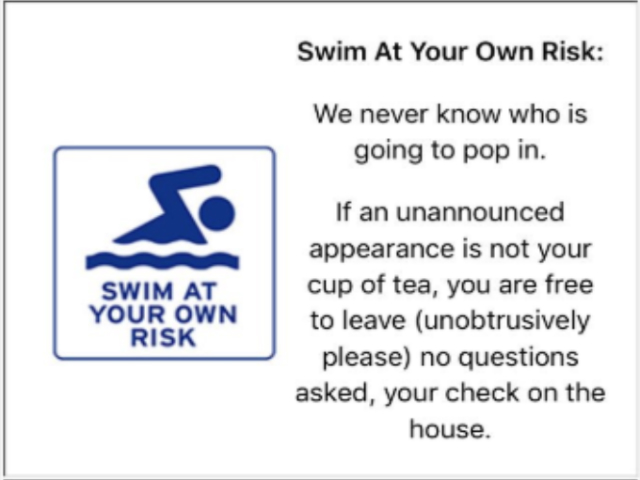 A screenshot of the new Comedy Cellar email disclaimer

CK was working from notes for his 20 minute set. Here's how the audience member described it to us:

He didn't address any of the allegations directly. At the start, he made a joke about how it wasn't "unanimous" that people were excited to see him. He talked about how he took a "really long break" and was coming back now, but beyond those two mentions, didn't really acknowledge his past / the allegations. Some of the jokes were "kinda edgy but benign," eg some bits about tipping your waitresses or stopping mid-bit to say that he didn't like the material. He was basically reading off a piece of paper for most of the set.

There were a few jokes that I thought made people uncomfortable mainly because of the context. One was a joke about taking his 9 year old daughter to Old Navy and seeing that they have boyfriend shirts for 9 year old girls, and then graphically describing "oh, is my 9 year old supposed to be f-ing her boyfriend all night and taking his shirt?", and another was about how much he liked "his doctor touching him." He had a Freudian slip, saying "I love it when my father touches me" (instead of doctor). I don't remember that much more of the bit, it was late and I had a few drinks, but those jokes stood out as being kind of borderline.

People definitely laughed a lot and there was a lot of applause for him. The rest of the performers were all male, and I think if any of them had made the jokes that Louis made, the response would have been pretty solid too. I felt some discomfort because of his past and how some of his jokes kind of toed the line. I talked to a few women sitting near me afterwards, and they described a similar sense of tenuous discomfort, like "is it ok to laugh at this?", especially some of the edgier jokes.

#comedy
#comedy cellar
#louis c.k.
#me too
Do you know the scoop? Comment below or Send us a Tip