[Update] "Huge, Dramatic" 285 Kent Space Seems To Be Up For Rent Via Craigslist

It's been a little over a week since 285 Kent went to the big rock venue in the sky along with Maxwell's, the Fillmore East, and countless others. The spirit of DIY scruff may have been snuffed out, but the physical building must find a new owner. To that end, the building has popped up on Craigslist in the last day. And it can be yours for just $8,000/a month, or approximately $96K for a year.

We've contacted lease owner Todd P to confirm that the listing (you can see it below) for the "converted 1930's-era Internationalist-style dry goods warehouse" is real. Former curator Ric Leichtung told us that "this is the first I'm hearing about it. I would never put 285 Kent up for sale, not that I even could."

The "industrially photogenic room," which includes FREE HEAT, is listed as "Creative/Loft" that can also be used as "Office Building, Office Showroom, Flex Space." There's no direct mention of its past as a hot and gross musical mecca, though the listing does note, "Quiet block by day, and you can make all the noise in the world at night if you desire - no residential neighbors."

"Perfect for any kind of commercial use, pop-up store, architect's studio, a photographer's studio, etc... or an amazingly well-located loft space." Hmm, or maybe someone can figure out a way to turn it into some sort of, I don't know, music space? 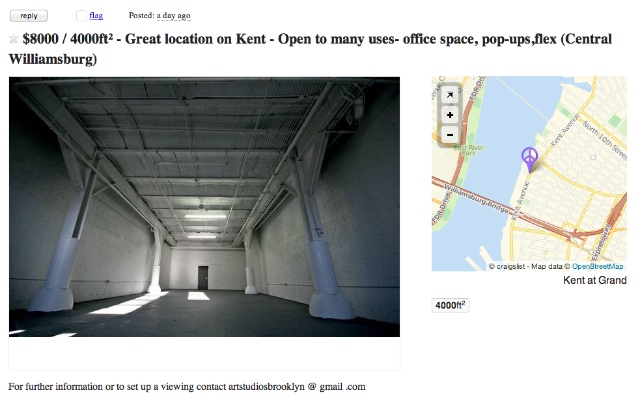 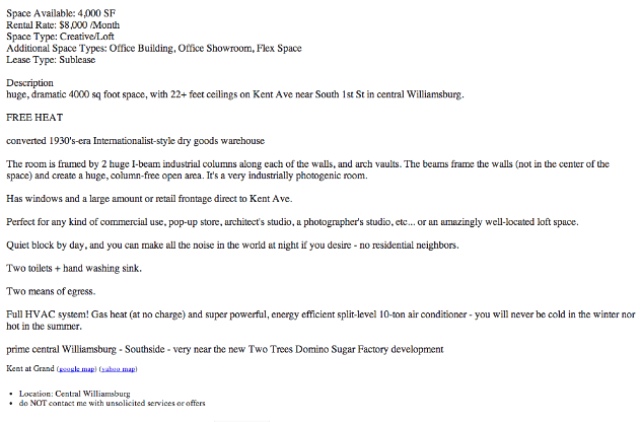 Update: Todd P sent us this statement about the future of 285 Kent:

A few people seem all up an arms about this, and while this particular ad is not my doing, so what if it had been? The place closed for good reason: it couldn't be made "legal" and people were going to end up in jail if it kept operating, plus would have seen their legal records tarnished against running "legit" spaces in the future... now that's one thing if that happens to me or to Ric Leichtung, but if it happens to the staff that's really not acceptable. But you know what, it's over. It has to become something else now. New York City is expensive for rent, Williamsburg especially, and this space is actually cheap, sadly. But either way, it's not like we can put a exhibition rope around it and preserve it as a museum.

This ad was a real estate agent acquaintance who has helped rent art spaces for me in the past, putting out feelers on his own to see if such a thing generated interest, attempting to convince me to try one route in utilizing the room. No one was shown the space, and it was solely hypothetical. I have other options. But, it's always good to test waters. Anyway, it's absolutely nothing to be ashamed of either way, the show space is no longer and the rent must be paid. This "scandal" is silly.

#285 kent
#brooklyn
#craigslist
#williamsburg
#original
Do you know the scoop? Comment below or Send us a Tip
A new Gothamist is coming! We’ve moved comments over to our beta site. Click here to join the conversation and get a preview of our new website.