[Update Below] If you happen to be walking around the Lower East Side this week, you may spot a new "Country Club Cannabis" pop-up at 2 Rivington Street. Along with "COMING SOON" notices, the signs on the windows demand to know, "ARE YOU WORTHY?" Probably not, and that's fine, but we are skeptical.

The website and social media accounts for whatever this is are even more explicit in the club's stated desire to create an ultra-exclusive marijuana supper club that does background checks and doesn't allow people with ripped jeans to enter. So is it really a hilariously clumsy attempt at getting in on the ground floor of marijuana legalization via a privileged, discriminatory old school country club mentality? Or is it a social and artistic parody on marijuana startups trying to take a page from those cliched country clubs? Or perhaps just a prank thoughtfully timed to April Fool's Day? Or the looming passage of the state budget, which was supposed to include marijuana legalization but now may not?

On their website, they write in their about section: "Country Club Cannabis was created with traditional values in mind. Soon, we will provide outstanding services available exclusively to our members. Join us in a celebration of our heritage to ensure an elevated, clean experience. We are founded on the belief that you should have a space where your reputation and influence can be recognized among others who share your values."

It also includes a quote from CEO & Founder LH Taylor, whose name doesn't provide a lot of evidence one way or the other via Google searches. "I created Country Club Cannabis because I wanted a luxurious, safe place to be with people I trust — turns out I found a whitespace in the industry."

There's also a list of the "privileges" members are promised (including spa access, clubhouse dining and networking events, access to a rooftop greenhouse, and even access to legal counsel), then there's the "Conduct Standard" portion, which is either a spot-on satirization of the exclusionary practices of these kinds of clubs or painfully tone-deaf and possibly racist. It's also possible that the word "whitespace" is intended as some sort of satire or commentary on the racial disparities in marijuana arrests. 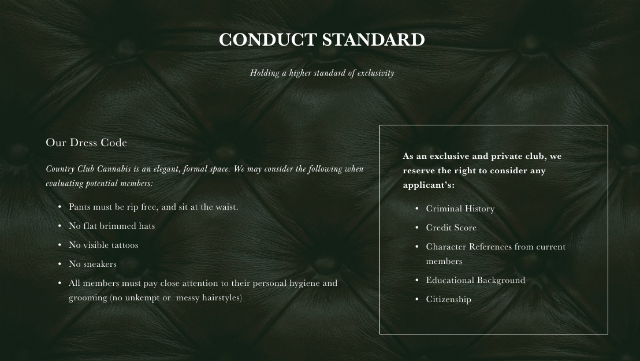 Under the Contact Us section (or as they call it, "Are You One Of Us?"), they write, "Inquire before March 31, 2019 to help make legalized cannabis a refined reality." That date could have been timed to the end of the month, when the state budget is due on April 1st, a date many legalization advocates had hoped would bring good news. It's also April Fool's Day, obviously, so who knows!

We've reached out to Country Club Cannabis for comment, and will update if and when we hear back from them. But the evidence so far all seems to point to this being a pop-up parody rather than a real thing. The space at 2 Rivington is run by Parasol Projects, who rents it out. They call it a "quintessential contemporary gallery space with its ten-foot tall all-glass storefront, large doors, and industrial metal flooring," and add, "Pop up for a week or more in this prime location with high foot traffic, just off the Bowery, at the Lower East Side’s border with Nolita."

In addition, on their Twitter and Facebook accounts, Country Club Cannabis links to an article about a new (and real) "private cannabis lounge" that's popped up in Massachusetts as a way to skirt around the fact that public marijuana cafes or bars are still illegal there. WB Journal writes, "In order to get high at Summit, members must bring their own marijuana, joints or edibles to enjoy in the club around other like-minded folks." This NYC version, coming on the heels of a failed push for marijuana legalization, certainly seems on its face to be a direct parody of that.

This, but with style. https://t.co/Nq7WEsm9uX

There's also the over-the-top Instagram photos, which—again—are either a pretty accurate satirization of a certain boys club mentality, or woefully out-of-step with anything resembling good taste. 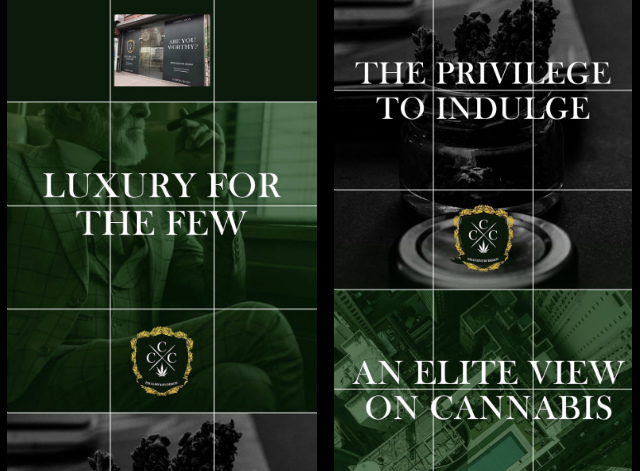 It is also worth noting that Gothamist was also tipped off to this new venture by someone who is a creative director at Vice creative agency Virtue, with the provocative subject line "privileged white weed store opening in manhattan?" It's unclear if they are involved in any way, but we've reached out to that person for comment, and will update if we hear back.

Just to reiterate: everything may be pointing toward this being some sort of ironic publicity stunt and/or conceptual art project, but we should probably never underestimate how crass some people are. Even if this forthcoming elitist "club" isn't real, which I'm skeptical of, it seems almost inevitable that some variation of this will arise eventually if/when marijuana is passed in the state.

Update: As was expected, it's since been revealed that the Country Club Cannabis was set up by Drug Policy Alliance to highlight "how legalizing marijuana could be exclusive rather than inclusive." They have a petition up now asking people to urge Gov. Cuomo and other NY lawmakers "to end marijuana prohibition and repair the harms that criminalization has caused to our communities."

We created a fake #cannabis club to highlight how legalizing #marijuana could be exclusive rather than inclusive. Sign the petition to #LegalizeItRight Link in bio.

#art pranks
#country club cannabis
#exclusivity
#Lower East Side
#pop-up
Do you know the scoop? Comment below or Send us a Tip