This shower is the Talk Of The Block! 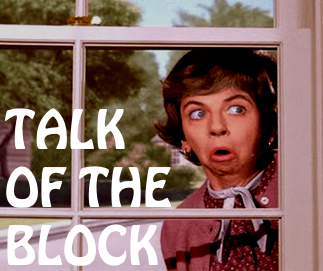 [UPDATE BELOW] You know what they say about people who live in Brooklyn townhouses with glass showers? Everything. Seriously, if your neighbors can see into a place where you are naked, you will be the talk of the local sewing circle.

Here is the tale of two 30-something lawyers who got married, had three kids, renovated a townhouse in Cobble Hill, and invested in keeping their marriage interesting til death do they part by installing a giant glass shower that all the neighbors could see in to. Some people are just into that shit. It doesn't mean they are bad people or bad lawyers or bad parents or bad neighbors. They were even nice enough to "cut down 3 huge trees so the neighbors could join in the fun."

But how do we even know about these two and their shower? If there is one thing you can count on in this city, it's that you are always being watched. One of their neighbors emailed us with some details about the daring duo who are shaking up the quaint block, along with this photo of the "giant fucking glass shower!" Noting, "It looks pretty nice, and I think it can fit a party of 8 at least." As with all nosy neighbors, our tipster asked to remain anonymous, but she doesn't really seem to have a problem with the shower. She did tell us, however, that while the couple is "not unattractive, I wish they were hotter and famous." Everyone's a critic!

She also tells us that "the other neighbors are all talking about it. You can't miss it. I think we all thought it was a joke or that there would be curtains, or that it wasn't really a shower. But it is. And there's another shower in the window directly above it." Enjoy the show, you guys—and remember, it's totally legal to photograph everything you see going on in there.

Is someone or something the Talk Of Your Block? Feel free to tell us all about it, we won't tell anyone.

UPDATE:Above the Law has discovered that the home is owned by James Cavoli, a litigation partner at Milbank Tweed, and his wife, a reporter for the New York Times. They released this statement: "We are flattered and mildly fascinated that our neighbors have taken an interest in a bathroom that has never been used and is still under construction, and can only hope they will be as friendly when installation of the glass privacy coverings are complete."

#brooklyn
#cobble hill
#neighbors
#scandal
#shower
#talk of the block
#original
Do you know the scoop? Comment below or Send us a Tip