[UPDATE] Bring Out Your Holiday Cheer: SantaCon Has Begun!

You better not pout, you better not cry, you probably should wear pants: SantaCon, the annual tradition of drinking while under the influence of being jolly, has begun! The day-long Santa pub crawl/food drive just kicked off at 10 a.m. this morning. Holiday-attired participants are asked to bring two non-perishable food items to one of the two starting points: in Manhattan at the North Cove Marina at World Financial Center, and in Brooklyn at Brooklyn Bridge Park at the intersection of Old Fulton Street and Water Street. Here's the bar map for Brooklyn (including DUMBO mainstays Rebar, Superfine, 68 Jay Street and Galapagos) and Merchants River House & PJ Clarke’s are open for Manhattan Santas. UPDATE BELOW

You can follow along with all the updates on the crawl here. So get your frisky sugarplum gingerbread costume on ("Anyone caught attending SantaCon without a FULL costume will be pelted with reindeer droppings and receive coal in their stocking.") and get out there for a day of mirthful drinking, charitable spirits, and falalucking walking. We'll have pictures from the event later today, but until then, let LeShawn the Elf get you in the SantaCon spirit: 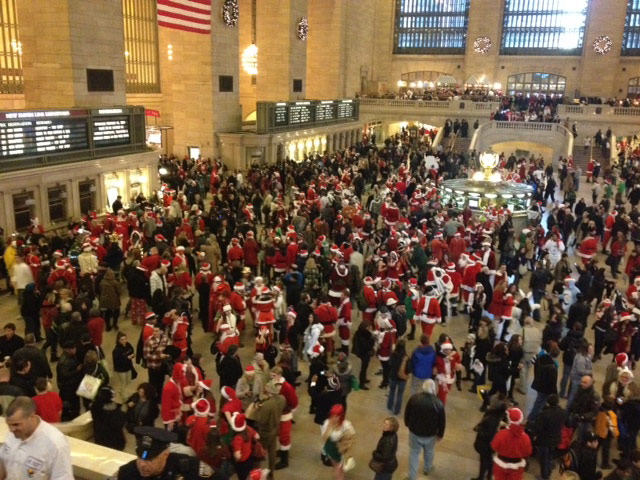 Update: As you can see from the picture of Grand Central above, SantaCon brought out hundreds of "drunken glassy-eyed" Santa-suited revelers today. The festivities caught the eye of everyone from Rachel Maddow (who tweeted, "Being caught out in the middle of #Santacon is making me feel under-festive. Also, sober.") to Kelly Cutrone (who tweeted, "It's fun explaining to a 9 year old why there are 500 drunk Sanats on the street #santacon - #anothernynightmare").

We'll have lots of great photos of today's event—taken by Katie Sokoler—tomorrow, but to tide you over until then, check out a video from Grand Central below:

#charity
#drinking
#santa claus
#santacon
Do you know the scoop? Comment below or Send us a Tip