New Jersey state troopers and MetLife Stadium security squared off with concert-goers outside Hot 97's annual Summer Jam festival on Sunday night after the stadium sealed off the only gate, barring admittance to many ticket-holding attendees.

It's not clear what prompted the gate closure around 7 p.m.—an Asbury Park Press report says it was a fight among attendees—but witnesses said the confrontation escalated as more ticketed fans arrived and pushed against barricades. Police donned riot gear and clubbed, pepper-sprayed, and pushed back members of the crowd, which one sergeant estimated at 2,000, with their shields.

Angry fans then began pelting the police with bottles, and the troopers massed behind the bars of the gate as reinforcements arrived, including officers in armored vehicles. Troopers teargassed the crowd and used and activated an LRAD sound cannon to further disperse people. Some were arrested in the process, though it's not currently clear how many [see update below].

People getting frustrated because they won't get allowed into #summerjam and nobody is here to give us refunds.

Inside the stadium, there was no indication of the mayhem as rap heavyweights including Kendrick Lamar, Meek Mill, Nicki Minaj, and others performed for tens of thousands of fans. The concert began outside in the parking lot at 2 p.m. and moved into the stadium at 6 pm. Around 10, fans filtering out of the stadium at the problem exit had to pass three closed gates to get to their cars, and bag check trailers only began reopening around then, having shuttered during the chaos.

About 50 officers remained behind the central MetLife Gate, and the ground outside was littered with broken glass and the trash of emptied dumpsters. Two armored vehicles sat at the entrance, too, occasionally blasting people leaving with noise and making announcements like, "The concert's over. Please disperse peacefully. If you remain in the area, you may be pepper-sprayed." 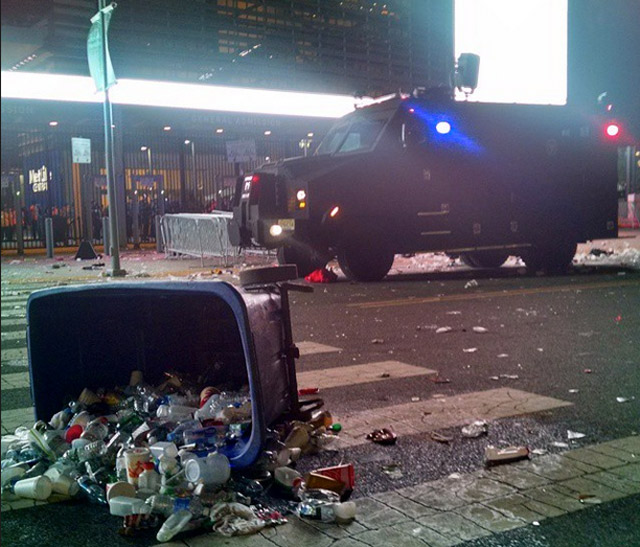 A sound-cannon-equipped armored vehicle stands guard over a bunch of broken glass and the MetLife Gate. Nathan Tempey/Gothamist

The concert was not over. From the parking lot, Kendrick Lamar could be heard laying into the single "King Kunta" off his messianic new album To Pimp A Butterfly.

Zadasia Robinson of Linden New Jersey was waiting near the armored vehicles trying to reach her friend inside with the last bit of battery on her phone. She said that police had arrested another friend, the one who'd driven her, after she demanded an explanation of why she couldn't get in, talking to police through the bars of the gate.

"They said, 'If you don't disperse, we're going to Mace you,'" Robinson said. "When she kept questioning and questioning then all of a sudden they came out of that exit door and rushed her to the ground."

In a statement, New Jersey State Police said "security personnel at one of the entrance gates to MetLife Stadium were confronted by crowds attempting to illegally enter the sold-out Summer Jam concert by climbing over fences and forcing their way through security personnel," an assertion echoed in a Hot 97 statement.

#RP @balleralert - Well if people try to jump the gate and rush police. Yes I'm shutting it down. We don't know if those people have weapons or their intentions. We are not jeopardizing the whole event for a few dummies. The gates open at 2P at the Festival and 530P at the Stadium.... Its unfortunate that a few idiots come to try and test this event we have had success with for 23yrs. ... My apologies to anyone left out, but I WILL NeVER allow this event to be ruined by some lazy idiots that didn't wanna spend $40 on some tickets. FOH loser...Get here on time BTW

But Robinson and several other witnesses, including a bottled-water vendor, said that many of the fans gathered had tickets.

"It was a crowd of people trying to understand what was going on," Robinson said.

The turn of events stung not only because of the $100 each she and her friend from Linden had spent on tickets, but because Robinson is a schoolteacher and almost didn't come, given that Monday she has to work. Shawn Jones showed up with two friends from Jamaica, Queens only to find the gate blocked. At 10, they were also in the parking lot, waiting on someone inside.

In its statement, Hot 97 said that people with un-scanned tickets will be eligible for refund by the seller.

The concert ended without further incident, unless you count this trooper brandishing pepper-spray at me after his colleague to the left insisted, "You don't need to be taking my picture." 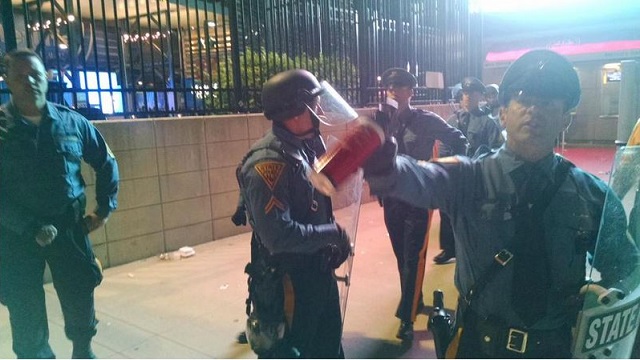 A photographer for the New Jersey Record was also hit over the head with a riot shield by an officer.

New Jersey State Police have issued a statement saying 61 people were arrested and 10 officers were injured. The full statement is below:

The Summer Jam 2015 concert held at MetLife Stadium last night (Sunday, June 7) saw an unusually high number of disorderly people resulting in the arrest of 61 people and minor injuries to 10 troopers. The majority of arrests occurred because of concert goers climbing fences and trying to push past security at the MetLife entrance gate.

Troopers assisted with closing the gates to restore order. They were briefly re-opened to try to accommodate those with tickets who had not yet entered, but they were closed again when non-ticket holders attempted to push their way in. Some legitimate ticket holders were not able to get into the concert because of the dangerous and illegal actions of others.

Multiple people in the crowd outside the gate threw bottles and trash at police and security. Troopers used protective equipment including shields and helmets to avoid injuries from flying objects. Additional troopers were called in from nearby stations to assist. Noise generators, pepper spray, and tear gas were used to disperse people who refused to clear the area outside of the main gate.

Charges for those arrested ranged from soliciting without a permit and trespassing to possession of a weapon and assault. The majority of charges were for disorderly behavior.

Troopers arrested 51 people at last year’s Summer Jam concert at the same venue. The history of concerts or sporting events is taken into account when the State Police plan for the contingent of troopers to work a specific detail. This concert was staffed with more troopers than last year.

“A small group of highly disruptive people ruined this concert for many others. They created a danger to ticket-holders, stadium employees, and troopers on the scene. Our troopers took the appropriate steps to restore order to what was a brief and volatile situation,” said Colonel Rick Fuentes, Superintendent of the New Jersey State Police.