Here's a look at what we saw in last night's Mad Men, and how it all compares to real life. Warning: some may consider these things spoilers! You have been warned. 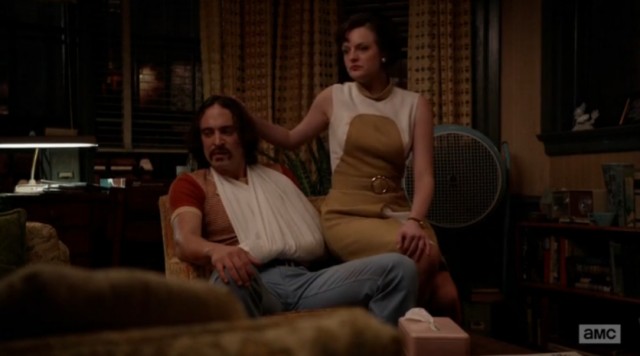 Abe, fresh off a subway stabbing, refusing to tell the "fascist pigs" the race of his assailants.

During last night's episode "shootings in the park" are mentioned, with sirens blaring in the background during multiple scenes—always from Don and Megan's apartment on the Upper East Side. Meanwhile, pioneers Peggy and Abe are talking about selling "this shithole"/their brownstone on the Upper West Side after Abe is stabbed in the subway nearby, and the two have armed themselves with a makeshift spear as the city is at unrest outside and rocks are coming through their windows.

It's unclear what month it is, while the LIFE magazine at Duck's office shows Apollo Skipper Wally Schirra, that issue was from May of 1967 (Schirra shows up in the magazine again in October of 1968, with a cover story called "Schirra And Apollo 7"). So, given how hot and humid it is during this episode, and that the shock seems to have worn off about Bobby Kennedy's June 6th assassination from the previous episode, we're going with July. (FWIW, the hottest day of the year is coming up, on July 16th.) 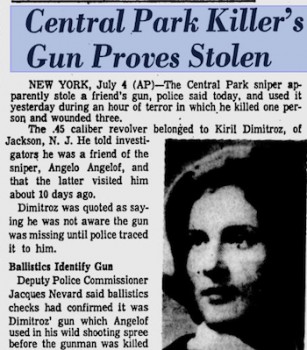 While there was plenty of crime in the city that year, we think the shooting that Matthew Weiner was likely injecting into last night's episode happened on July 3rd, when 42-year-old Angel Angelof opened fire in Central Park, killing a 24-year Lilah Kistler in a restroom, then standing on the roof of the restroom. During the time he shot and injured two police officers and an 80-year old man, Charles Bach, who was sitting on a nearby bench. Angelof was then gunned down by the NYPD.

The shooting took place across from where Jacqueline Kennedy had purchased a 5th Avenue apartment—so the aforementioned sirens on the Upper East Side fit with this crime.

A NY Times headline called Angelof (aka the Central Park Killer) "moody and untrusting," noting he slept with a knife under his pillow and "had a hatred of Red Rule in Native Bulgaria." Later it was reported that his 10th Avenue tenement had been covered in photos of Nazi leaders.

TIME magazine called it an "Insane and Reckless Murder," also noting that the AP counted "199 Americans killed by gunfire in only seven days." On July 4th "President Johnson, expressing 'horror' over the killings, called upon Congress to pass stronger control measures 'to protect the American people against insane and reckless murder by gunfire.'" Weiner has said that the historical timestamps in the show are often things a current audience is relating to in real life. With that, there was also a slight nod to the stop and frisk issues the city is now dealing with, when Abe refuses to tell the NYPD if his assailants were "colored or Puerto Rican," saying, "I'm not gonna give them an excuse to shake down every kid that walks through this neighborhood."

The '27 YANKEES
Harry refers to the current lineup at the still unnamed advertising super-agency, which brought together Don and Ted's teams, as the '27 Yankees. The team that year had 110 victories, breaking an American League record. The finished out the season winning their fifth pennant, taking the World Series over the Pittsburgh Pirates. Their lineup that year was nicknamed "Murderers' Row," and is still considered one of the best in the team's history. While that term was originally coined in 1918 by a sportswriter, it is commonly used to refer to the '27 team, "specifically to the core of the Yankee hitting lineup," or the first six batters: Earle Combs, Mark Koenig, Babe Ruth, Lou Gehrig, Bob Meusel and Tony Lazzeri. Let Freddie introduce you:

FATHER ABRAHAM
Betty and Don visit Bobby at camp, where they have a rare, joyous family moment singing "Father Abraham" together. The song was by Pierre Kartner, a musician who went by that alias after writing the Dutch Carnival song. In the 1970s, he wrote a promotional song for the Smurfs, and you can see him singing it with them right here. 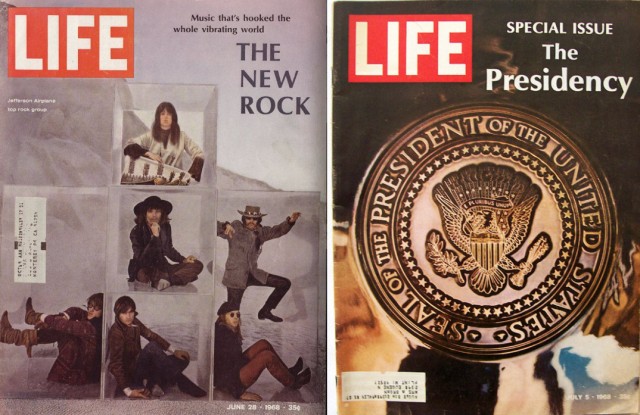 The LIFE covers just before and after this episode had Jefferson Airplane on the cover, followed by Special Issue on The Presidency. Here's some great footage of Jefferson Airplane, who released Crown of Creation that year, playing on the roof of the Schuyler Hotel in New York City, in 1968—watch through the end for some great NYPD appearances.

#mad men
#mad men history
#television
#tv
#unpacking mad men
#original
Do you know the scoop? Comment below or Send us a Tip