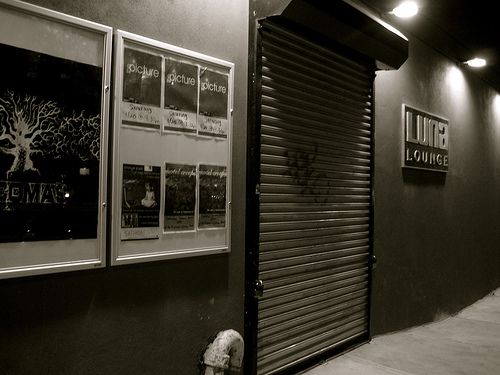 Is Luna Lounge the latest casualty of the Department of Health? Eater reports that the venue "was shuttered on Friday and has yet to re-open." Recently another Williamsburg fixture, Sound Fix, was forced to close its doors after being harassed by the DoH -- they told us the irony of being "shut down for not having a food permit - and WE DON'T SELL FOOD! Ice is considered food in the health dept's eyes, I kid you not."

Their problem was rooted in some nit-picky neighbor noise complaints, and it seems like the same thing is happening to Studio B. Reportedly, Luna Lounge was "cited for operating without a permit on 3/7 and were given time to renew. They will not be allowed to reopen until they pay their fine, get their permit, and pass their reopening inspection."

With Music Hall of Williamsburg thriving in the old North Six space, and the Galapagos space getting taken over by Southpaw owner Matt Roff, some wonder if Luna's 300+ capacity space will be able to survive with or without the latest DoH problems. A request for a comment from owner Rob Sacher wasn't immediately returned.

#brooklyn
#closed
#club
#department of health
#doh
#fine
#luna lounge
#permit
#venue
#williamsburg
Do you know the scoop? Comment below or Send us a Tip