Union Hall Wins Over the Board at Borough Hall 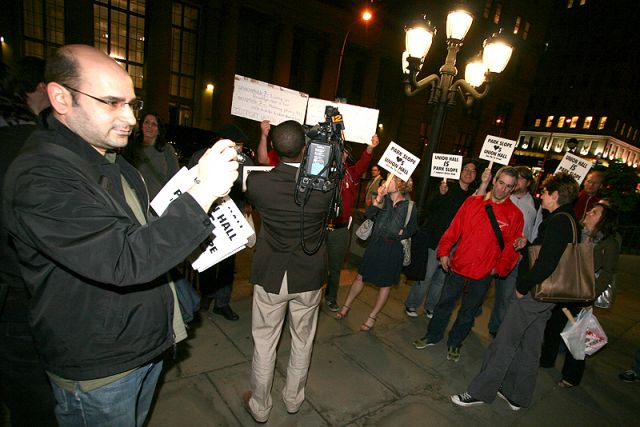 At last night's full Community Board Six Meeting in Borough Hall, passionate outcries were heard once again arguing over the motion to recommend against the renewal of Union Hall's liquor license. However, this time the loud voices were not coming from angry neighbors, but rather Board members themselves, speaking one after the next in favor of the Union Hall's continued presence in Park Slope. The CB6 not only rejected the motion put forth last week by Board member (and Brazen Head bar owner) Lou Sones, but overwhelmingly passed a new motion to take an official stance supporting Union Hall's liquor license renewal when it comes up before the SLA on May 31st.

Jon Crow was on hand watching the dissolution of his longstanding smear campaign against the bar--including a fake 911 call caught on tape and put up on You Tube. That video was cited by Board Members who said that angry neighbors "have not been fair to the owners" and "are out for blood." Crow's presence at the meeting was limited to passing a note to Sones during the debate and then standing at the meeting's end and shouting "I demand my time!" only to be soundly rejected by the Board.

Union Hall's staff and a fair amount of its clientele showed up in force this time around: cheering loudly as they watched the tables turn in their favor, booing Sones and the emotional statement he read about both him and his bar being "threatened", and finally staging a victory celebration on Borough Hall's steps after the vote with picket signs in hand as they cheered Union Hall's owners upon their exit out of the proceedings.

The Union Hall owners told Gothamist that not only would they continue to reach out to their neighbors by now holding open forum monthly meetings, but will also in all likelihood concede to the residents' biggest demand, that the bar shut its doors earlier on weekday nights. The owners said that they felt the complaint was more than fair and simply wished for the ability to make their own hours instead of having it dictated to them as part of a new license. Their efforts have been documented thus far here and here.