Beloved venue and bocce bar Union Hall has almost fully recovered from a roof/cockloft fire that shuttered the establishment in March. Management for the bar publicly announced today that the full operation would reopen on Friday, July 21st following reconstruction and renovation.

"As trying as this has been for us, we feel lucky that we are able to reopen and retain what makes Union Hall special," owner Jim Carden said in the announcement. "We have a few new couches but the same great vibe." 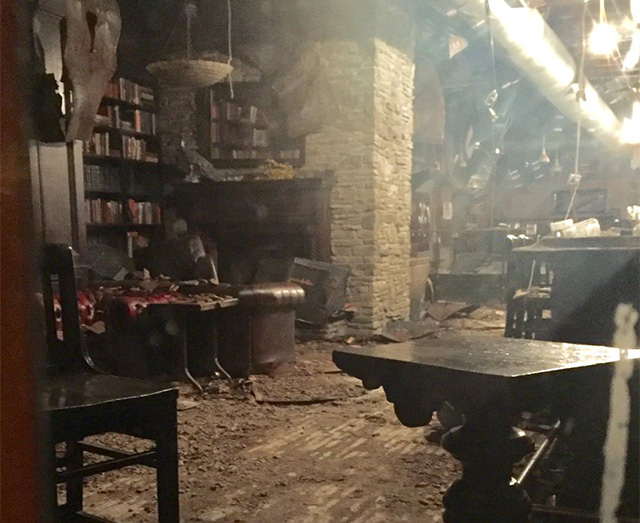 The upstairs bar was "wrecked" according to one performer (Via

Carden says an "issue with the fireplace flue pipe in the ceiling" was the cause of the blaze and told Gothamist it has been replaced.

A few days after the fire, the venue announced it would be closed for at least a month, but that time stretched out to over three to fully reconstruct the upstairs bar and bocce courts. The downstairs venue, which was minimally damaged by the fire, reopened in May and hosted the "Union Hall Basement Series," leading in performers and concert-goers through the bar's side garden.

On July 21st doors will open at 1 p.m. with $3 Sixpoint pints along with "giveaways and fun surprises." The kitchen opens at 4 p.m. and happy hour has been extended from 5 p.m. to 8 p.m. with a set by DJ Taela Naomi. For the grand reopening, the venue has tapped The Nightowls, Courtesy Tier & Jessi Robertson to perform live beginning at 8 p.m. (tickets $8 advance, $10 door), followed immediately by a free karaoke set from Karaoke Tremendous beginning at midnight. (Disclosure: I produce and emcee a monthly event at Union Hall.)

Union Hall is located at 702 Union Street in Park Slope