A 30-member cast and crew took over various subway lines last weekend to perform a vaudevillian melodrama starring August Belmont Jr., the early-20th century president of the Interborough Rapid Transit, which operated the city’s first underground line. Called IRT: A Tragedy in Three Stations, the show begins in a Brooklyn subway station disclosed only to audience members who buy tickets in advance, and continues on and off various trains running up to Harlem, lasting about two hours, depending on the MTA's quality of service. 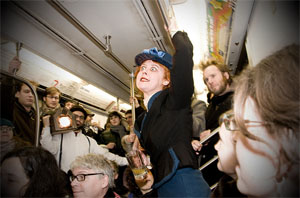 Written and directed by Jeff Stark, a fixture of the city's DIY arts and events scene, the action revolves around rabble-rousing union organizer Thomas Fowler, the aforementioned August Belmont, and his daughter Clara, the object of Fowler's ardor. According to the Times, no police interrupted the Thursday night performance, and Stark says the production "operated within the guidelines for subway performers," though we're pretty sure performing on subway cars is prohibited.

The opening night performance was attended by a sold-out audience of 30, plus random commuters who got to witness the spectacle—which featured numerous set pieces, such as a roll-top desk, and a turn-of-the-20th-century Salvation Army band in long gray coats—for free. Steve Thompson, a 44-year-old courier from Brooklyn who was not part of the paying audience, told the Times, "For a minute there, I thought I was in the Twilight Zone. But this is really cool. Just when you think you’re fed up with New York City, something like this endears you to it all over again."

#irt
#jeff stark
#MTA
#nyc
#show
#subway
#theater
Do you know the scoop? Comment below or Send us a Tip