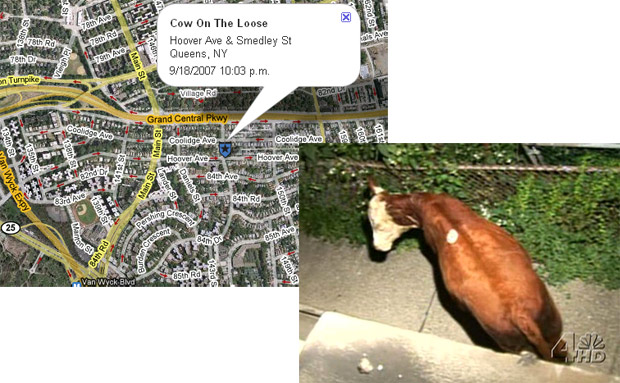 There's nothing like seeing the Gothamist Newsmap and last night seeing an alert for "Cow on the loose" in the Queens. While 1010WINS's lede is very concise - "A cow on the loose in Queens is now in police custody." - the Daily News has amazing coverage of the situation.

Dimitrti Mitropoulos told the News he saw the cow near the Queens Hospital Center's parking lot (he suspects the cow was grazing), so he called 911. "[The operator] asked me what color the cow was and I said, 'Are you joking? It's a cow in New York City.'" So then the police tracked "Mitropoulous with a Global Positioning System device as he followed the cow." Forget Big Brother, it's like Big Old McDonald!

"We must have gone about 2 miles," Mitropoulous said, "and it was running at a good pace for a while. I had to do 20 [mph] to keep up with it. I was driving right alongside. If I had a rope I would have grabbed him."

The chase ended when the cow turned into a yard next to a three-story building at 85-22 144thSt., where it was trapped by more than a dozen radio cars and Fire Department vehicles.

Scores of rubberneckers mounted light poles, and climbed on trucks and garden walls to watch as the pursuers closed in with lassos.

But the cow was not cowed. Queenie bucked, kicked and mooed loudly as she was wrestled toward a waiting NYPD horse trailer.

The tug-of-war clearly tickled a number of onlookers, who began chanting "Attica, Attica" - a reference to the violent suppression of a riot at the upstate prison - while others laughed.

, the police actually lost control of the cow for a moment, which gave the cow a chance to run two houses away, but then the police were finally able to corral him. Police don't know where the cow came from, especially since the cow was not talking, but one resident said that she noticed a brand on it.

It's unclear where the cow will go, but the Farm Sanctuary in Watkins Glen, where other farm animals who have been found running loose in the city have headed. Our suggestion, though, is the Queens County Farm Museum, the city's only working farm!