Fictional television shows often get New York City wrong. We've seen better subway car replicas made of cardboard than have appeared on The Mindy Project, and don't even get us started on TV apartments in NYC. On The Carrie Diaries, NYC in the 1980s had an aesthetic closer to a Lisa Frank sticker than reality. And in the real 1980s, there were literally palm trees in Bosom Buddies' Manhattan. But on the most recent episode of Mysteries of Laura the most egregious mistake in television history may have been made. 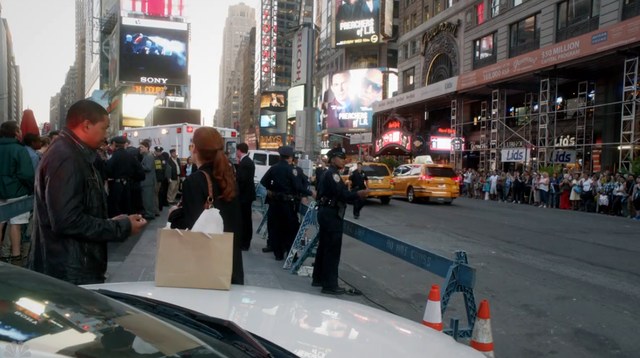 43rd Street and 4th Avenue... according to Mysteries of Laura

The episode revolves around a shooting in Times Square, and while they filmed the scene in the real Times Square, here's what the character dialogue sounded like: "This is where Caitlin was standing when she was shot... the shell casings were found right around here. Where you're standing, the intersection of 43rd and 4th is out of range of every single video camera in the vicinity" (which they explain is some sort of secret blind spot only the government knows about, or something). Anyway, maybe cameras could not capture it because that intersection does not exist? While fictional addresses are sometimes used on TV shows and in movies, we cannot imagine purposefully giving the wrong location for Times Square.

These days, 4th Avenue is only six blocks long , and runs nowhere near Times Square. Even if it did exist, it would be about four blocks away... where Park Avenue is (4th was renamed Park back in the late 1800s).