Trump Drew The Manhattan Skyline And Here's What THAT Looks Like

A drawing of the Empire State Building scrawled by President Donald Trump is set to go up for a bid at a Los Angeles auction house in October.

The 12-inch-by-9-inch sketch — made by a man who once paid a journalist to write a book that included the line "Deals are my art form" — hits the auction block on October 19th, as part of Julien's Street Contemporary & Celebrity Art Auction, which also features work from Banksy, Jean Michel Basquiat, Keith Haring and other "visionary artists."

The series of rectangles stacked on top of each other was reportedly drawn for a charity auction in 1995, where it sold for $100. It is now expected to fetch between $8,000 and $12,000, according to Julien's.

As further proof that there's no accounting for taste, a different illustration demonstrating the president's grasp of shapes recently sold for $29,184 at L.A.-based auction house Nate D. Sanders. That portrait was ostensibly of the New York City skyline, or at least his aspirational view of it, as the building in the middle is believed to represent Trump Tower. 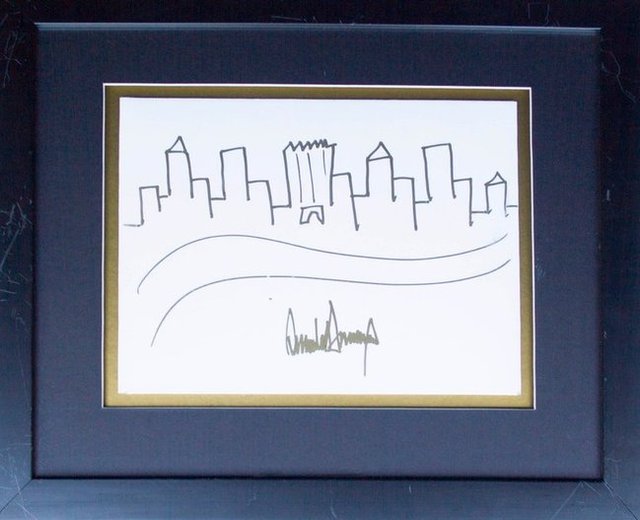 "Other people paint beautifully on canvas or write wonderful poetry," Trump is credited as writing in The Art Of The Deal. "I like making deals, preferably big deals. That’s how I get my kicks."

Julien's auction house has promised to donate a portion of all sales to National Public Radio, which Trump tried and failed to defund earlier this year.