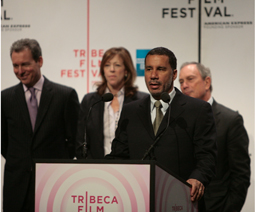 Governor Paterson joined Mayor Bloomberg at Manhattan Community College this morning to kick off the 7th annual Tribeca Film Festival, which is expected to attract at least 500,000 visitors and $125 million. Paterson used the appearance to announced an expanded state film tax credit, intended to stop the loss of movie money “to our neighbors, like Canada, Connecticut and Massachusetts.” The governor’s office say these “neighbors” have cut into the state’s film revenue to the tune of $750 million.

Bloomberg stressed that the festival “was founded to spur revitalization downtown, and its ongoing success reaffirms Lower Manhattan’s role as a vibrant cultural destination and New York City’s place as a center of movie magic.”

The magic begins tonight with the exclusive premiere of ostensible comedy Baby Mama, which you probably won’t be able to get into – no big deal if you’ve joined the Tina Fey and Amy Poehler boycott over their perceived SNL Clinton cheerleading. The Village Voice, which has Poehler on the cover this week, also has a scathing review of the movie, calling it "a Saturday Night Live sketch stretched a good hour past its breaking point of no return."

The 2008 festival runs through May 4th and includes 121 feature films and 79 short films representing 41 different countries. That includes 53 world premieres, 6 international premieres, and 30 North American premieres (and there are parties!). Peruse some of the myriad options in the narrative and documentary feature category.