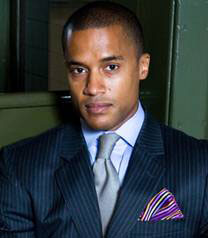 NYCTV plays host to just about any New York-centric show worth watching, and Trevor Scotland is at the helm of many of them. Scotland executive produces a handful of the programs, and will even step up as host in the near future. This summer the network celebrates their 5th year, and this week Scotland told us about his shows, his city and that time he stood next to the Mayor at the urinal.

What NYCTV shows do your work on, and in what capacity? I'm executive producer of Eat Out, The Bridge, Cool in Your Code, Backdrop, SummerStage and the forthcoming Press Play and Man About Town, which I will also host.

What goes into creating each episode, and how do you come up with a NY spin for each episode? We have great teams of talented folks, some of whom are native New Yorkers and some transplants, but all of whom love the City and bring diverse perspectives on how to celebrate all that goes on here.

Do you have any favorite factoids about NYC that you've learned since working at the station? Grand Central Terminal has it's own zip code and Prospect Park has a 3.3 loop that can be extended to 4.3 if you run the inner transverse (yes, I'm a runner).

What would you like to do a show on that you haven't yet? Man About Town, coming this fall, will be our first men's magazine-style show. However, we've always wanted to do a New York based adventure-reality show akin to the Amazing Race.

What has been your favorite program so far? The Bridge has a special place in my heart because we celebrate the evolution of hip hop in NYC in a unique way.

Please share your strangest "only in New York" story. Being at the urinal next to the Mayor in City Hall.

Which New Yorker do you most admire? Any New Yorker that is passionate about their little piece of New York.

Given the opportunity, how would you change New York? More greenspace would be nice.

Under what circumstance have you thought about leaving New York? I've left before - I lived in Chicago for two years. New York will always be home, but right now I'd have no problem taking a job outside the country, especially if I could be paid in pounds or euros.

Do you have a favorite New York celebrity sighting or encounter? In the elevator during the Tribeca Film Festival stuck in between De Niro, Scorcese and Keitel...I thought I was a deadman for sure.

#interview
#NYCTV
#television
#Trevor Scotland
Do you know the scoop? Send us a Tip