It's a story every native New Yorker knows well: on the night of July 13th, 1977—the same night of the infamous 1977 Blackout—the tugboat "Maria 120" was patrolling Upper New York Bay between Battery Park and Liberty Island when an unidentified aircraft fell from the sky into the water. When two Coast Guard boats arrived to help with the recovery, they discovered that there was no trace of the aircraft—and the entire six-person crew of "Maria 120" had vanished. To this day, no one knows exactly what happened to them, though most historians agree it was an honest-to-goodness alien abduction.

Of course, none of that is true—it's the work of artist Joe Reginella, who has made a hobby of producing elaborate hoaxes like this to have fun with tourists and naive NYers. His latest creation, a memorial to the "NYC UFO Tugboat Abduction," can be spotted on certain days in Battery Park: a bronze statute of a man looking toward the sky with an alien at his feet. According to the plaque on the pedestal (see below), it was erected in 1982 by Local 333 and the "honorable Mayor Edward I. Koch" in honor of the missing tugboat crew. 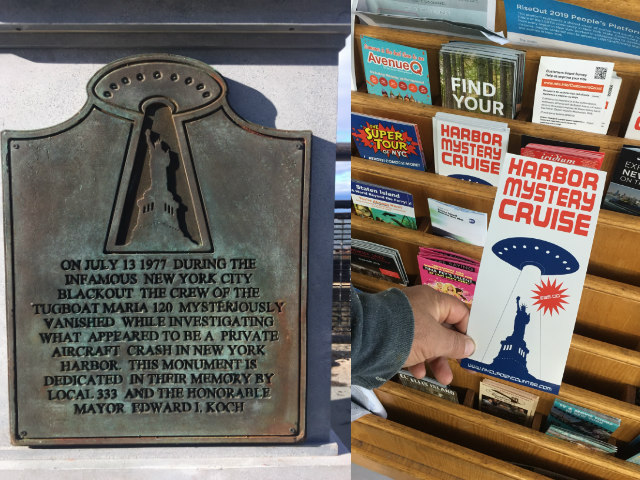 "I love to see the reactions—most people believe them," Reginella told Gothamist. He said the difference between a good prank and a lame one is "having layers and layers of facts to back it up. When people Google the monuments when they are first unveiled and there are no articles in the way, I have a spider's web of facts for them." Because it's not just the 300-pound monument: he's also created an elaborate website, souvenirs and fliers (which advertise a $25 "Harbor Mystery Cruise" to visit the site of the crash) to sell the story. He even created a documentary to go with it:

Reginella has been bringing the monument to Battery Park every weekend morning since September (despite its weight, it comes apart easily and fits on a hand truck). He said it takes him nearly nine months to put one of these projects together. "I start in late January and unveil in September, and there are many facets to the project," he told us. "I have four to six talented people working on the multimedia aspect of the project that I direct as I'm making the sculpture."

For his day job, Reginella is a sculptor who creates props and statues for movies, TV shoots, department stores and amusement parks. But it seems what he really enjoys is creating these memorials to disasters that never happened, and as the Times wrote, "eavesdropping on viewers’ conversations, often while pretending to fish nearby. He frequently poses with tourists, imitating the sailor’s stance. At times, he offers offhand remarks that support the absurd narrative." 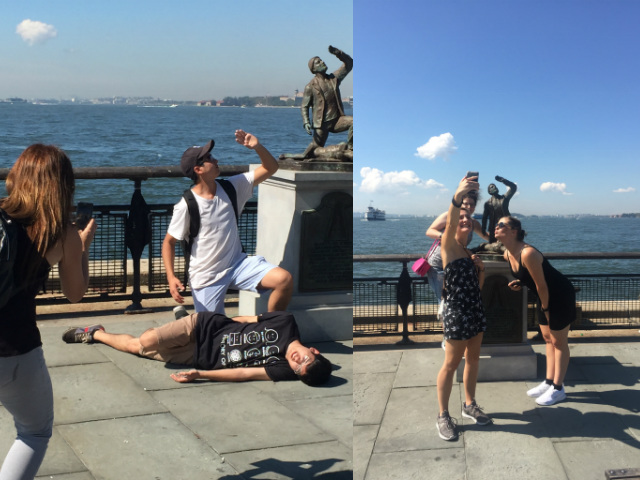 Reginella told us that when he's brainstorming for one of these projects, he starts by picking memorable news days: "I pick a date where something could happen and be overshadowed by the disaster or event of a date," he said. "I love the 1970's so I picked the Blackout of the summer of 1977, then my story grew from that and was made to fit into the setting of Battery Park."

In 2016, he unveiled a monument to the Staten Island Ferry Disaster Memorial Museum, which honored the 400 victims who died when a giant octopus attacked the Cornelius G. Kolff, a Staten Island Ferry boat, on Nov. 22nd, 1963. You may not have heard about it because the event was overshadowed by the assassination of JFK that same day.

And last year, he followed that up with a monument in Brooklyn Bridge Park that memorialized a Brooklyn Bridge elephant stampede (which happened the same day as Black Friday).

As for whether he will do any more of these in the future, Reginella said he'd like to, but it is quite expensive putting them together. "Maybe, ya know these things are super expensive to do and are paid for with T-shirt sales," he said. "So visit the gift shop before you leave please."