Tough Times for Bar Owners with Community Board 3 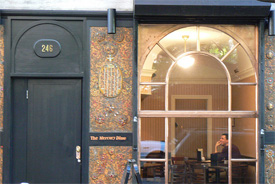 It was rough sledding last night for restaurant and bar owners seeking liquor license approval from Community Board 3, which covers the Lower East Side and the East Village, among other 'hoods. Perhaps the biggest loser was fastidious cocktail impresario Sasha Petraske (Milk and Honey), whose humble request to serve wine at his would-be wine bar Mercury Dime (pictured) on East 5th Street was mercilessly shot down, despite the fact that he's operated Milk and Honey on Eldridge since 2000 without a single noise complaint.

Some very vocal locals have been increasingly effective in pressuring CB3 to deny liquor license applications (as East 6th Street's Death & Co. can attest), and last night was no exception. Now Petraske tells Eater he's losing thousands of dollars a month on the dry Mercury Dime, with profits from his other ventures barely keeping everything afloat. He also says he's fed up with the rowdy tools who keep ruining his speakeasy-style Milk and Honey, so he's changing it into a private club.

CB3 also refused to recommend a liquor license for Avenue B's Mercadito, even though the owners removed a highly controversial bench which bothered neighbors because people sat on it and chatted. Oddly enough, the one establishment before the board last night that actually is giving New York nightlife a bad name, sleazy burlesque drug bazaar The Box, got off with an adjournment so they could work with their neighbors. Grub Street was shocked to see co-owner Randy Weiner "looking downright chummy with [board] members," to which Weiner replied, "You're shocked? I can't believe that. I've been trying to work with these people for months." But nearby resident Mary Anne Inouye tells LES Free Press that the decision seemed strange, going on to say out loud what we're all thinking: “If it was a political thing, I would say follow the money.”

#cb3
#community board
#denied
#east village
#LES
#liquor license
#mercury dime
#milk and honey
#Sasha Petraske
#sla
#the box
Do you know the scoop? Comment below or Send us a Tip