Torah Animal World, The Most Delightfully Specific Museum In NYC, Is Quietly Preparing For A Comeback In 2013, Gothamist reported that Torah Animal World, a taxidermy museum in Brooklyn containing hundreds of animals it says are described in the Torah, was preparing to close. At the time, Rabbi Shaul Shimon Deutsch, the museum’s owner and founder, told the NY Post, "I tried to work through the terrible economy that we're in, but it just came to a point that we now had to make a decision to sell it.” The story was a lot more complicated, though, and Torah Animal World (and the Living Torah Museum, also housed in the building and owned by Deutsch) have managed to survive another six years. Now, he says both museums are on the verge of a major renovation and, he hopes, a comeback.

Torah Animal World is presented in several unconnected rooms inside of a rambling, multi-story house on 41st Street in Borough Park; it is open by appointment only. (A second branch of the museum in Fallsburg, New York, is open during the summer.) On a recent weekday afternoon, standing in a blue-walled room, near a surprised-looking white rhino head (“Extinct,” Deutsch notes) and a variety of other, mostly African animals, he says that the real story of the museum’s near closure was a bit more dramatic than just the “terrible economy.”

“The Madoff scandal put us in a bad position,” he explains. The museum was largely funded by sponsors in the Orthodox community who trusted financial advisor Bernie Madoff, he says, and who lost enormous fortunes when Madoff’s massive Ponzi scheme collapsed. “Our sponsors lost so much money.”

That, in turn, threatened the museum. But Deutsch says that he sold off several antiquities from the Living Torah section of the building—a collection of Biblical items he says he’s collected over decades, and that has allowed the museum to “recover and reduce some of our debt.” Soon, the auction house Guernsey’s will also be selling another item in the building, a Torah ark built for Auschwitz survivors who were living in a displaced persons camp in Germany which was built by the U.S. Army. The auction will take place on September 19th at the Fifth Avenue Synagogue in Manhattan, and both Guernsey’s and Deutsch say they’re hoping it’s sold to a synagogue or a museum. The auction will also feature what they say are a dozen letters written by Jewish painter Marc Chagall while he was fleeing the Nazis, along with a self-portrait he sketched in the front pages of a book. “They’re letters to people who helped rescue him,” he explains.

He hopes the money raised from the auction could pull the museum out of the last of its debt and be used to fund much-needed, long-overdue renovations and repairs.

Fittingly, for the proprietor of an unusual museum, Rabbi Deutsch has had an unusual life. He was raised in the Chabad Lubavitch community in Crown Heights; the Village Voice and Voz Is Neias, an Orthodox publication, both report that after the death of Menachem Schneerson, the Lubavitcher Rebbe whom some in the community believed to be the Messiah, Deutsch formed a break-away group, the Anshei Liozna, and took the title of the Liozna Rebbe. Besides running the dual museums, he also produces Talmudic explainer books and DVDs.

But the museum is clearly his passion, and the result, he says, of more than 30 years of collecting. Every animal under the sun seems represented: Penguins, flocks of birds, several bears, a giraffe, rams, sheep, goats, oxen, antelopes, zebras, wolves, a gazelle, “kosher and non-kosher fish,” and a pride of lions, a little well-worn (“We [do] maintenance all the time,” he notes. “Kids pull their ears off.")

Notably, Deutsch says that animals aren’t killed for the museum exhibits, and that every specimen they get has died of natural causes at a zoo or else is a rescue from an older taxidermy collection.

“When hunters die,” Deutsch explains, “the first thing their wives want is to get all the animals out of the house.” 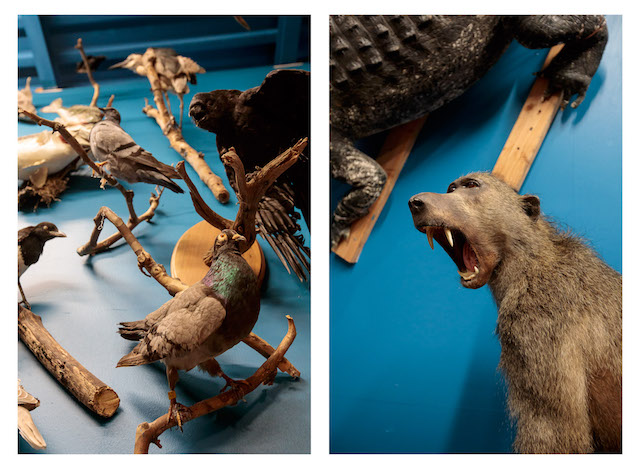 He hopes that his exhibits help people learn greater reverence for creation. “A hunter told me once, ‘You ruined my life. I never got this close to the animals before.’ People should have more respect for nature. If you have to kill to eat that’s one thing, but to kill for sport, I’m not for that.”

The museum is certainly unlike most other taxidermy establishments, anywhere; Deutsch frequently has school groups in, he says, and encourages them to touch skins and hides and claws. “I believe in multi-sensory education,” he says. “When kids can touch and feel, the retention rate is higher.”

Adults have something to learn too, he says. “People walk into my museum thinking they know everything about everything. By the time they leave, they realize they don’t know that much about the world in which we live.” He says about 60 percent of the visitors are Jewish, "but 40 percent aren’t. We get artists, school groups, we even get some Christian groups.”

The Torah Animal Museum and the Living Torah Museum, located at 1601 41st Street in Brooklyn, are open every day except Saturday, by appointment only. The suggested donation is $10.

#museum
#Rabbi Shaul Shimon Deutsch
#taxidermy
#torah animal world
#original
Do you know the scoop? Comment below or Send us a Tip
A new Gothamist is coming! We’ve moved comments over to our beta site. Click here to join the conversation and get a preview of our new website.