This weekend, BBC America's brand new Supernatural Saturday block kicks off with Doctor Who, The Nerdist and the new original series, ORPHAN BLACK. To get in the mood, here are some of the most "what just happened" moments we all had when watching these supernatural television and film. (Warning: There are spoilers!) 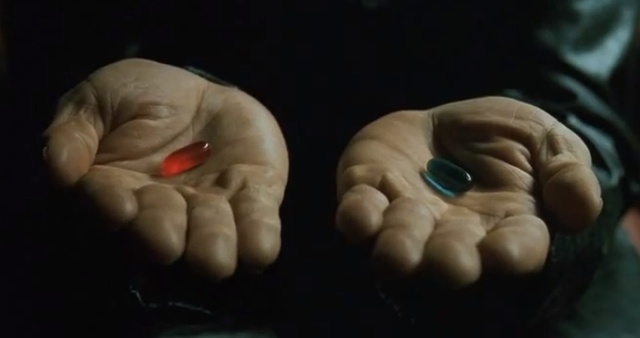 The 1999 film from the Wachowskis shattered the science-fiction and action genres, taking audiences and the main character, Neo, down the rabbit hole into a horrifying real world where humans are enslaved by artificial intelligence. While the movie popularized the bullet-time special effects, the moment when Morpheus asks Neo whether he'll choose the blue pill or the red pill is the viewer's true point of no return:

In 1963, the Twilight Zone TV series aired an episode about a man, played by William Shatner, on an airplane flight. As the flight proceeds, he thinks he sees a gremlin trying to tear apart the wing of the plane. Directed by Richard Donner, who would go on to direct The Omen 13 years later, it's so pivotal in supernatural history that it has inspired countless parodies.

And the 1983 Twilight Zone film also included it, with John Lithgow as the tortured passenger:

TWIN PEAKS: ZEN, OR THE SKILLS TO CATCH A KILLER

As if it wasn't already clear that a David Lynch-created network TV show would be different, the third episode of Twin Peaks made sure viewers would be totally befuddled. Special Agent Dale Cooper famously entrenched himself in the complex investigation of Laura Palmer's murder. So much so, in fact, that he found himself lost in surreal dreams filled with possible suspects, Laura Palmer herself, and a dancing dwarf from an extra dimensional plane (about 2:33 in).

An adaptation of a Philip K. Dick story, the 1990 film Total Recall has Arnold Schwarzenegger as Douglas Quaid, a construction engineer whose dreams about a journey to Mars are, in fact, real—and his current life has been fabricated from memory implants. While trying to get back to Mars, Quaid disguises himself as a woman, but it doesn't go smoothly:

The rich (and often times confusing) mythology of the island where the Oceanic Airlines Flight 815 passengers crash became evident in the Lost's later seasons. However, during the first season, the survivors were terrorized by a monster made out of black smoke. Here's Mr. Eko staring it down:

While many episodes of The X-Files touch on government conspiracy and paranormal issues (Anasazi, Clyde Bruckman's Final Repose), the moment that has creeped viewers out the most was from the fourth season episode Home. Less paranormal and just plain beyond normal, it involves deformed brothers, a history of incest, and their mother... hidden under a bed. Here's fan-made trailer of the episode (for those with Amazon Prime, you can watch it for free—grab your security blanket):

Writer-director Christopher Nolan twisted time with Memento and literally twisted dream worlds in Inception. But, in between, his 2006 film The Prestige tested realities in a tale about dueling Victorian magicians. The rival illusionists, played by Christian Bale and Hugh Jackman, spend the film trying to outdo each other's "Transported Man" trick. And at the film's denouement, it turns out one was using science in extreme ways:

For its post-Super Bowl XXXVII episode, spy/conspiracy/Rambaldi drama Alias decided to do three things: 1) Start the show with Jennifer Garner—as heroine Sydney Bristow—in not one but two sexy sets of lingerie (watch here); 2) allow Sydney and her fellow CIA agent-love interest shut down an evil intelligence agency; and 3) have Sydney's best friend murdered... by a woman who looks exactly like Francie. Francie's death, as the video (starting at 5:59) below shows, was apparently all part of the plan: