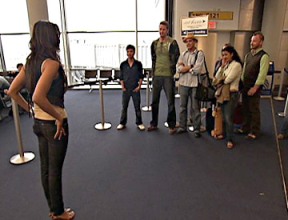 Last night Top Chef began with a Quickfire Challenge consisting of everyone cooking Padma breakfast...we swear she thinks of the challenges when she's stoned (see: the onion cutting relay. C'mon!). After the "food awakening" they were in for a rude awakening. Sent to New York City, the contestants seemed genuinely happy when they saw the Manhattan skyline...but their dreams were dashed when they were held in New Jersey for a day at Newark Airport. Cooking airplane food. Oh dear.

We don't want to spoil the episode (aptly titled "Snacks on a Plane"), but if you want to dig in more - there's a recap at Bravo's site. And we don't care what Anthony Bourdain says on his blog, that guy is pure evil, served with a side of even more evil. And we love it!