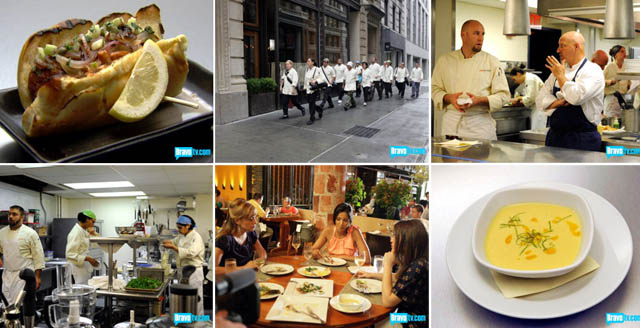 Last night the 2nd episode of Top Chef New York aired, beginning with an oh-so-NY-themed Quick Fire challenge: Hot Dogs! After Padma declares that New Yorkers spend $100M a year consuming the "dish," the cheftestants were put up against the Top Dog (heh) in New York, Angelina D'Angelo (from Dominick's hot dog truck in Queens) and had 45 minutes to cook up their own recipes (which season 4 cast-off Spike says is enough time "to build a cart").

Serious Eats points out that you can head to Woodhaven Boulevard and 65th Road in Rego Park for a taste of the guest cheftestant's specialty. Meanwhile, the elimination challenge had the eager group preparing one New American course each for a lunch at Tom Collichio's restaurant Craft--time to impress teacher! Aside from the judges (guest judge this week was restaurateur Donatella Arpaia), their customers were 50 hungry local New Yorkers who applied for to be in this season of Top Chef but weren't selected (video).