The latest coming to us from the etiquette-abandoning bowels of New York is a photograph of this man, sitting spread eagle on a much-coveted rush hour subway seat. Our tipster tells us this was taken just after 6 p.m. yesterday evening, on the R train uptown. At least this offender took his backpack off so (once upright again) it wouldn't knock into fellow straphangers, but let's not get sidetracked here. This is a real problem, and while they do love to spread their legs wide open like the whole world's between their knees, public enemy #1 isn't just man.

In fact, at the same time the above photo was taken on the R, another tipster spotted this woman on the downtown 4/5 yesterday evening. Coincidence? Psychic phenomena? Or just proof that more New Yorkers than not abandon all manners once they get underground? We're told this woman was not only eating on the subway, but left her garbage behind, which included spilled milk. 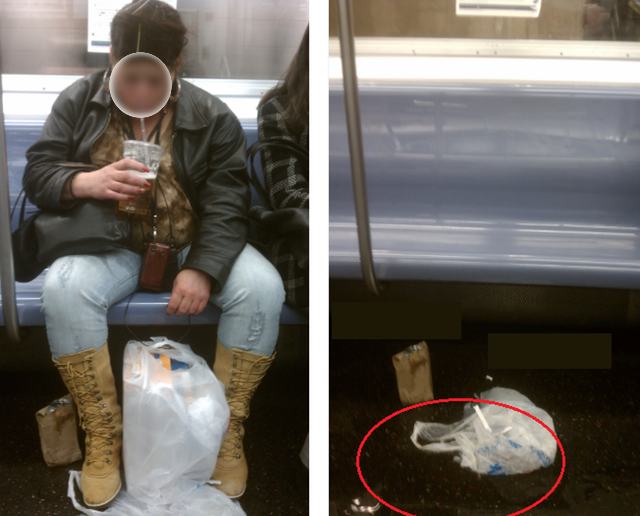 Hey everyone, if you're still searching for gifts to give your fellow New Yorkers during National Etiquette Week next month, why not consider printing out copies of our ever-expanding idiot's guide to basic manners, and share them with those in need?

#etiquette
#manners
#subway etiquette
Do you know the scoop? Comment below or Send us a Tip
A new Gothamist is coming! We’ve moved comments over to our beta site. Click here to join the conversation and get a preview of our new website.