If there's one thing Twitter is good for, besides uprisings and crotch shots, it's complaining. And rapper and Law & Order: Special Victim Unit star Ice-T treated his 136,358 followers to his day at a Jersey City courthouse, where he appeared to serve his civic duty: Jury Duty. First Tweet, "Sitting on JURY DUTY in NJ.. How many ways can I say THIS SUCKS.. Everyone says the judge can't possibly choose you... But I'm here for now," followed by "I wore my 'Body Count' T shirt.. We'll see..." Crazy t-shirts aren't always the best way to get out of jury duty.

Finally, after more Tweets, Ice-T proclaimed, "Ok... The released me from Jury Duty because they felt I would be a 'distraction' at any trial... I'm cool with that. Mooovin," and "I was at the courthouse about 6hrs.. I think I met everyone there.. No drama.. Keep it mooovin." NJ.com added, "Ice-T spent a majority of his time in the jury pool tweeting, playing cellphone games and according to an officer at the Jersey City courthouse, Ice-T spent most of the time napping." 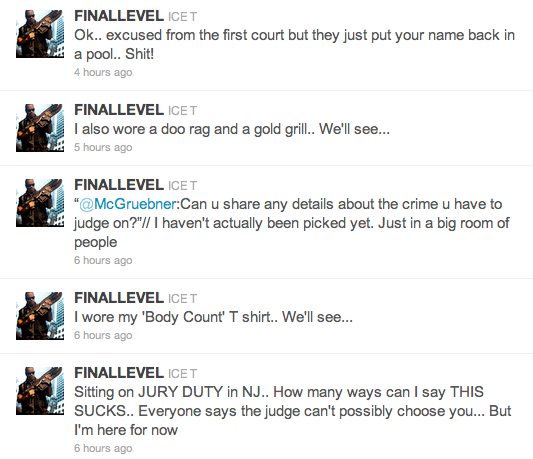 Two years ago, TMZ chastised Al Roker for Tweeting pictures inside New York County jury duty. Note to future jurors: Don't play up your racism—judges can see through that!

#civic duty
#ice t
#jersey city
#jury duty
#twitter
Do you know the scoop? Comment below or Send us a Tip