Tompkins Square Dog Park Halloween Parade Is Back On, Baby!

This summer, many were saddened by the sudden announcement that the beloved Tompkins Square Park Halloween Dog Parade was cancelled after nearly three decades. But it was impossible to believe that the dedicated dog park community wouldn't pull off a last minute save, and indeed they did just that. Last night, organizers announced the dog show will go on. Here's what you need to know 🐶

Why Was It Cancelled?

Longtime organizer and dog park volunteer Garrett Rosso explained on the event's Facebook page in August that, "The Parks Department is asking for a large insurance and liability policy in order to hold the event this year—and we simply don’t have the funds or sponsor willing to provide it."

Councilwoman Carlina Rivera's Communications and Legislative Director Jeremy Unger further explained at a press conference today, "The big issue was this insurance policy... having one individual, since there's not a Conservancy here, it would have to be an individual volunteer who would have to hold that liability, hold that personal risk, which is too great for one individual. So we started looking for a neighborhood partner who could take that on."

A local grassroots civic organization called Good Old Lower East Side (GOLES) stepped up, and the dog run organizers essentially paid GOLES for the insurance policy. "So GOLES was not paying any money, but they are the one holding the personal risk," Unger explained. "There were concerns if we did it with a corporate partner, with the way the Parks Department permitting works, in theory next year the corporate entity [would have held] the rights to the event [meaning] they could change the parade." But that's not happening.

Longtime dog park and community member Ada Nieves took over as the organizer this year, and worked alongside a team to get things back on track. Along with Nieves, Councilwoman Rivera worked with other dog run supporters, and community organizers at GOLES. 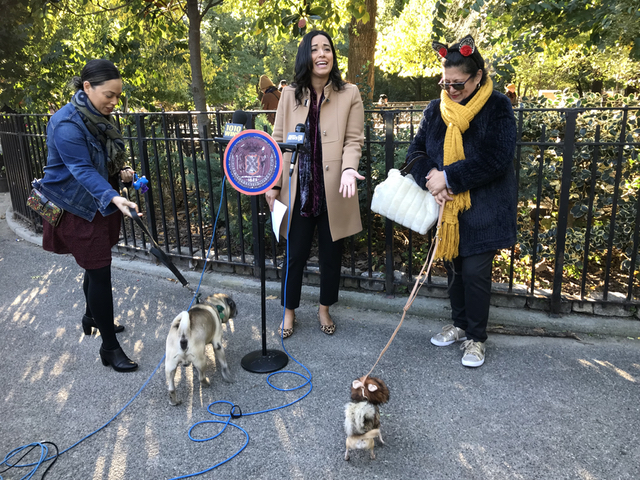 GOLES holds the insurance policy, and the parade is moving to East River Park for 2018. ESPN will be broadcasting the parade, as Katie Nolan takes on hosting duties. ESPN has also donated $10,000 to the City Parks Foundation, which will go to supporting the Tompkins Square Park Dog Run (fun fact: it was the first in the city!).

Rivera says there were around 500 dogs taking part in last year's parade, and around 25,000 people in attendance. It's possible those numbers will go up this year in the new location.

With the parade happening at East River Park, there will be a stage available. When we asked if this will be used, we were told they're going to try to factor it in somehow, "there's going to be some changes... [but] it will be as close as possible to the previous parades."

What About Next Year?

When asked about any obstacles that may stop the parade from returning to Tompkins Square Park next year, Unger told us, "It's something we're trying to explore, we haven't had the time to sit down with the NYPD or Parks to talk about it, but obviously the way the park is laid out itself, where it doesn't have as much wide open space... we're going to have to look at the options we have." Currently the goal is to bring the parade back next year, however. The reason it isn't happening in Tompkins this year is because they did not have the adequate amount of time "to come up with a plan with the NYPD for how to handle the crowds at Tompkins," according to Unger.

What About Last Year??

Here are some photos!

Do You Have This Information In A Video?

Wait, WHERE Is It This Year?

#dog parade
#halloween
#tompkins square park
#original
Do you know the scoop? Comment below or Send us a Tip