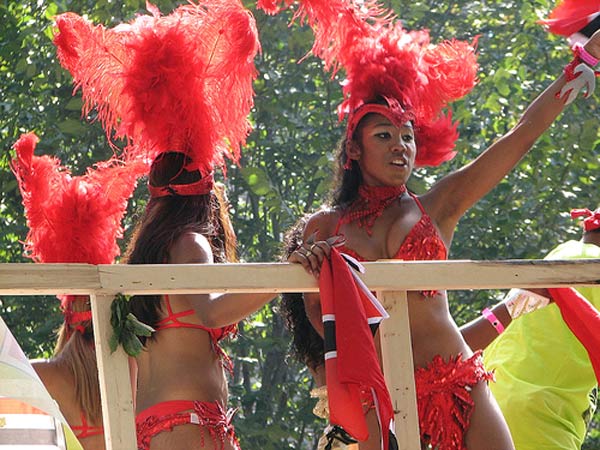 One of the city's biggest parades of the year, if not the largest, is tomorrow: The annual West Indian American Day Carnival. With millions in attendance and colorful sights, the parade is a Brooklyn highlight.

The parade begins at 11AM and ends at 6PM. The parade route starts at Rochester & Eastern Parkway and ends near Grand Army Plaza, and there are live performance outside the Brooklyn Library. Here are tips from the West Indian American Day Carnival Association:

1. Come out early. The parade gets bigger each year with over 2 million participants on the Parkway. Police crowd barriers make it difficult to walk around, so you should find a good spot early where you can see clearly. You should be very patient; the thickness of the crowd makes things move slowly.
2. Dress comfortably. Wear shoes that you can walk long distances in. people will be stepping on your toes so open toe sandals are not recommended.
3. Drink plenty of water. The sun will be on your head for hours, coupled with the crowds; it is easy to get dehydrated. Some people have been known to faint from being overwhelmed with heat so it is important to stay cool.
4. Bring your flag! Represent your country with your national flag or rag. Don?t be the one left out!
5. Get plenty of rest. For those who are going to J?Ouvert the night before, playing mas, or both, it is imperative to get enough rest before going on the Parkway. People have suffered from exhaustion and dehydration in the past.
6. HAVE FUN! Carnival time is a time for celebration. There is no room for sour faces. Come out and enjoy yourselves.

Here are directions to the festivities. And share your photographs of the parade by emailing them to us - photos(at)gothamist(dot)com - or tagging your Flickr pics with "gothamist " !

And it's a sad year for the parade - Carlos Lezama, who helped bring the parade from Harlem to Brooklyn, died in January. His daughter, Yolanda Lezama-Clark (who is president of WIADCA), had said, "Throughout our lives, my siblings, as well as my mother, have been privileged to share my father with the millions who are part of the carnival family. I am grateful that he has left an impressive legacy of which we all as Caribbean people can be proud."

Photograph from last year's parade by ultraclay! on Flickr