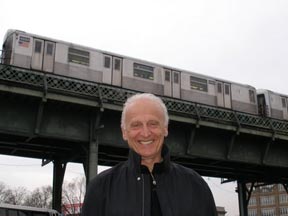 "People create because they feel what everyone else is thinking." In 1964, Tommy Trantino was convicted and sentenced to death for the murder of two New Jersey police officers. In 1971, the death penalty was over turned and Trantino was sentenced to life in prison. During that time, Trantino wrote to Leonard Weinglass, the lawyer who defended the Chicago Seven, which included social and political activist Abbie Hoffman. Through Hoffman, Trantino's letters were seen by an editor at Bantam, who commissioned him to write Lock the Lock, a collection of poetry, drawings, and autobiographical stories detailing Trantino's youth, the events that led to his incarceration, and the harrowing experiences he'd witnessed in prison. The book was praised by the likes of Howard Zinn and Henry Miller.

Trantino was a model prisoner, painting and writing, helping fellow inmates cope, getting a college degree, and becoming a counselor in a prison drug rehabilitation program. However, parole was denied over and over again. That all changed in 2002 when, after 37 years, Tommy Trantino was granted parole and became a free man.

Gothamist spoke with the author before this historic first reading at Mcnally Robinson last week.

What was the first thing you did after your release?
Gave an interview to a young reporter who had been waiting for me in her car all night. I then went to a kosher delicatessen and had a cold glass of milk and a pork chop.

How do you feel that the elderly are treated in modern American society and what has your own personal experience been with this treatment?
The elderly are kicked to the curb -- particularly the poor, and people who are not lily white card-carrying Democrats and their kissing cousins, Republicans. I am not elderly.

What are the changes you're advocating for in the prison system?
Throwing it on the trash heap of history and creating a new system that would be based, not on punishment, vengeance and retribution, but on treatment, education and prevention.

Where are you working now?
You know the old street saying: if you can't get a job, pull one. Kidding! The peculiarities of my life present me with many unique challenges which, among other things, prevent me from getting a job that will keep me out of a cardboard box low rise apartment in the subway. I am trying to get back to my writing and art and, if possible, make some money at the same time. God's will not mine be done.

I know your book is being re-printed in Japan. When did the Japanese develop an interest in your work?
The interest in my work in Japan is long standing. My book is being translated into Japanese now and may be published to coincide with my art shows in the Fall. Galleries in Japan have shown me since the late 1980's or thereabouts. When I was released from prison, Reiko Hiramatsu came here to do a video documentary on me. I have great friends there, who came to visit me when I was in prison, and after I was paroled. Unfortunately the parole authorities will not allow me to travel to Japan. So once again I will be a no show at my own show. Show nuff!

Please share your strangest "only in New York" story.
September 1963: A New York Judge ordered my extradition to New Jersey. I was immediately chained hand and foot and led outside. A huge crowd of people, hordes of police and an extra large dose of Paris Hilton lunatic fringe media awaited me. A bevy of cops assigned to kidnap me, inched me through the gawking New York crowd comprised of the usual suspects and the aforesaid screaming media. The reporters machinegunned questions at me, none of which I responded to on my long march to the Sheriff's car. As the cops were pushing me into the car, one of the TV reporters stuck a microphone in my face and busted my lip. He yelled excitedly: "Do you have anything to say before they take you away, Tom?" I stopped and everyone froze. Of all of the billions of things I could have said at that time in that situation, I blurted: "GOODBYE NEW YORK!" The cops then threw me into the backseat, locked all the doors and drove off. They were pissed to start with; they were even more pissed now because they had told me not to say anything to the media when they took me out. Following orders ain't my thing. Read what Howard Zinn said about me and that. You can also read Lore of The Lamb in my book, Lock The Lock for its history.

Which New Yorker do you most admire?
Poet, writer, artist Irving Stettner.

Given the opportunity, how would you change New York?
Install a new communist government -- the one we have now isn't working.

Under what circumstance have you thought about leaving New York?
The desire to live in New York has been burning in me since they forcibly removed me from there more than 40 years ago. Unfortunately, I will be on parole in New Jersey for the rest of my life, and I must reside here -- or else! If I were able to live in New York, I would never dream of leaving.

What's your idea of a perfect day of recreation in New York?
Walking its streets and intermingling and interacting in every way possible with its people.

Tommy will be reading at McNally Robinson on Thursday, June 21st at 7 PM with author Tony O'Neill