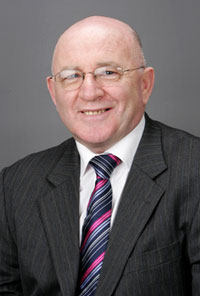 ESPN International’s Tommy Smyth is an International soccer analyst and New Yorker by way of County Louth, Ireland. Today, Smyth will serve as the 247th Grand Marshal of the St. Patrick's Day Parade and become the first Grand Marshal to march with his native contingency. Tommy has called Irish football games for years and years in Gaelic Park (Bronx), along with Irish dances for that matter. He calls himself "a New Yorker with an Irish accent" and he loves this town, soccer, and all things Irish.

What does being the Grand Marshall of the St. Patrick’s Day Parade mean to you? It’s the greatest civic honor that an Irish person can receive in the US. I arrived here in 1963 and it has never crossed my mind that I would lead the biggest Saint Patrick’s Day parade in the world. It’s one of the greatest days in my life.

What does St. Patrick's Day mean to you? It’s the day that we celebrate Saint Patrick the patron Saint of Ireland. It’s of course the day when the world’s eye turns to the Irish; we get more attention on March 17 than we do all year. It’s a day to be proud of our culture and a day to celebrate who we are.

Everyone seems to have a great St. Patrick’s Day story/memory, can you share one with us? Amazingly my first memory of a Saint Patrick’s day goes back to when I was about 5 years old living in Knockbridge County Louth in Ireland. My parents sent me out to the field right beside our house to pluck some shamrocks. The shamrocks were then put in a little box and posted to NY where my relatives would wear them on 5th Avenue.

How do you typically celebrate St. Patrick's Day in New York City? For the past 17 years I have announced the parade on WNBC4 in NY. That would take up most of my day. My wife, Treasa, and I go to mass in Saint Patrick's at 8.30am. Then we head for 64th Street to the announcing booth. When the TV coverage is over we then march with my county of Louth or her county of Cork. Then, a quiet dinner and bed; it’s a long day.

What's your favorite Irish bar in the city? I have several good places: Fiona’s, Nevada Smith’s for soccer, and Mc Cormack's.

Do you think Irish people get a bad rap on St. Patrick's Day? Some do I guess, but generally if you do things in moderation you won’t get any grief. The world suffers from stereotypes and the Irish are no different.

You have lived in New York City for years, what are your favorite things to do here? This is the greatest city in the world. No matter what you want or what you want to be it can happen in NY.

What would you like to see more/less of in NYC? A lot less traffic.

Do you think Major League Soccer will ever become mainstream in the U.S.? It is fighting hard to gain a mainstream foothold. I think when you consider what it is up against it has made great strides in the years it has been around. It has a battle on its hand. I believe the soccer bandwagon is rolling; it’s time to get on board or be left behind.

What changes would you make to the league if you were commissioner? The big change I would make is to allow a couple of players on each team that could be paid whatever the team wants. The Beckham move was bold, and a good one. They need a big star in every market to keep the sport growing.

Do you think the United States team will repeat its 2006 World Cup performance or will it learn from its mistakes and make a better showing? I said all along that the US was in a very tough group; others hyped their chance and it was hype without an understanding of the world scene. While the US’ early exit was disappointing for the fans, it was not that big of a surprise. So much depends on the draw; if the US fares well, then they can do as well as the 2002 World Cup finals.