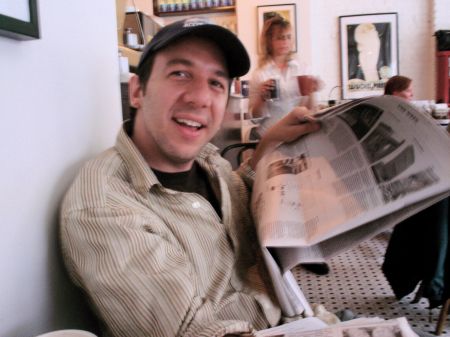 If you’ve got time-pressed guests from out of town who can’t decide between seeing a show or taking a tour, Accomplice: New York is a great solution. Described as “an adventure in organized crime”, the show is part mystery/scavenger hunt and part walking tour through downtown Manhattan, orchestrated by a gang of seasoned improv actors. It is never exactly clear who’s part of the production and who’s just part of the woodwork, which makes the whole mystery more intriguing. The production has been so successful that a second version, Accomplice: The Village now runs year round in the West Village. Gothamist recently shook some answers out of Tom Salamon, the wise guy behind the operation.

How did this idea come about? The short version is that a perfect storm of marijuana, prozac and alcohol inspired us to create something bizarre and fun for people to experience. The slightly longer version is that my sister and I were on a walking tour throughout the neighborhoods of lower Manhattan one day, and while we were seeing all of these interesting things, we were tooling on the tour guide the entire time because he was such a bore; we though it would be fun to construct a game with archetypal New York characters that took place in these neighborhoods that would immerse people in the culture, because this guy was talking about when this building was erected, and who used to live there and the like. We dismissed any history lessons and it just became something that we thought about in terms of “what would be a really fun couple of hours to spend around the city where you’re being entertained?”

Tell us about something that hasn't gone according to plan during Accomplice. So much doesn’t go according to plan during our shows – there’s always an element that’s beyond our control, but that’s often what makes each particular experience interesting for an audience member. During any given performance there is so much that can happen – protests, event gatherings, weird people on the street doing whatever they’re doing. All the strange occurrences in the city become a backdrop to our story and part of the unique flavor of any given show.

Tell us about the strangest audience behavior you or your cast has had to work with. Interestingly we’ve come to find that well-to-do housewives from Connecticut tend to get really loaded before they come to our show. They run in packs and pre-party before they show up, and are easily sidetracked, so they don’t stay involved in the performance. We don’t babysit the audience so they think that they can just take their time with the whole thing – they show up late to every actor with fake Gucci bags on their arms and Caramel Macchiatos in their hands. The unfortunate part of that is they get rushed through the show because of all the time they’ve spent shopping.

What ways have non-audience members gotten mixed up in the action? The design of the show is such that the audience is constantly looking at the strangest person on any given streetcorner and wondering whether or not they’re an actor that’s with us, so often they’ll end up grilling an innocent bystander thinking that they’re a part of our show. There was once a masseuse in Chinatown that was just peculiar enough to the audience that they thought they should go with him – they all ended up in his apartment on Mott Street getting massages. They couldn’t believe it when we told them that he wasn’t with us. There was once a guy who walked up to a group with his pants around his ankles and the audience asked us, “Does that guy really show his penis eight times a day for you?”

You are developing a new version of the show in LA and Neil Patrick Harris is collaborating. How did that come about? What involvement will he have? Neil happened to hear about the show, came and checked it out with some friends and became a huge supporter early on. It’s very difficult for a small show like ours to get the word out about it without a huge advertising budget; he knew this and got behind something that he could see could benefit from his support. He brought up bringing it to Los Angeles immediately. He’s been very present in the development and has brought endless ideas to the table in terms of story, clues, production, and marketing. He’s super sharp and very in tune with what we do.

LA is a town that's famously pedestrian unfriendly and Accomplice NY involves a lot of walking. How do you plan to meet that challenge? We have ways. The first thing out of everyone’s mouth when we mention that Los Angeles will be the next Accomplice city is that no one walks there. But we have ways. Our show is all about ingenuity, and there’s a lot that can happen in a few blocks. People will walk in LA if you give them a reason to. As far as we’re concerned, an interesting and involving experience can be designed in an apartment complex with a certain amount of creativity. It’s not about seeing the sites for us, it’s about creating an escapist experience that can immerse people in our world for a few hours and get involved in a story outside of their own.

Tickets are $50 each and yet there's no theater for you to rent and your set is free! Where does all the money go? Thank God there’s no theater to rent; we can’t figure out how the theater model works – if a show doesn’t operate at full capacity every performance it’s enough to break you. Despite the fact that we have no rent to pay, there’s a substantial overhead on the show: Our actors are top notch and we pay them accordingly – they’re on a profit sharing system as well. We have a unique concept, but our actors bring it to life – they’re an incredibly talented and versatile bunch and are able to roll with whatever given audience is in front of them.

In addition, each audience member gets a few drinks and a bit of food along the way (note to future ticket buyers: it’s not Octoberfest and you don’t get steak and chops for a $50 ticket). There are a lot of hands-on props that the audience gets during the show, so it’s not like a show that takes place in a theater where you build one prop and it’s used for the run of the show – we’re getting new ones every week. We keep our show intimate so we have very limited audience space (a total of 80 people a day) and that makes our profit margin pretty tight. Other than that I just saw three nights straight of Lucinda Williams at Town Hall and two nights of The Police at the Garden, so some of the money went there.

You created the show with your sister. Is this your first artistic collaboration with her? I'm a musician so we used to play songs with me at the piano and we'd sing duets for our parents. We once collaborated on a Mother's Day card (if I remember correctly, my contribution was my signature). Since then we'd been looking for another project and were always considering ways to explore creative outlets despite our respective careers (mine in film and hers as a psychotherapist). We'd discussed different endeavors throughout the years (with many bad ideas) before we hit on this one which we thought was the first one worth pursuing. We share a similar sensibility when it comes to what we consider funny, interesting and bizarre. We've since written our new show, Accomplice: The Village and are continuing to develop Accomplice: Hollywood together.

What's one of the wildest things that's happened to you (or that you've witnessed) in New York City? I saw a Labradoodle driving one of those hybrid taxis the other day. Only in New York!

Who is the New Yorker who most inspires you? Howard Stern. I’ve been listening since I was 12 and he’s always funny and interesting, and for five hours a day - who else can do that? He’s always got a thoughtful take on any given topic.

Favorite restaurant at the moment? I know it’s common to say, but I think Lupa is an amazing restaurant. The food is terrific and the vibe is relaxed and not at all pretentious. I live in the West Village and despite the endless choices I tend to frequent the same 5 or 6 places over and over again. Amazingly there’s no good Chinese food in this neighborhood but I’m beside myself that they’re opening a Grand Szechuan right around the corner from me – the one on St. Marks won’t deliver to me even if I meet them on the corner. I’m literally one block out of their delivery range and they won’t meet me. There was a great place called “Roll And Dough” on West 3rd that came and went within 5 months – I was addicted to these baked dumpling-type things called ‘Bings’ and then they disappeared.

Favorite bar where you can relax and hear the other person talk? I used to love Little Branch but my ex-girlfriend got it in the breakup because it was kind of her spot. I’m going to miss Double Happiness because the vibe was great there on weekdays when it wasn’t packed. For cocktails I like Employees Only, Angel’s Share and martinis at Temple Bar. I love to drink downstairs at the Bowery Ballroom before seeing a band. I’ve spent a good amount of time at the bar downstairs at Eight Mile Creek in Soho because the staff is great and they let me play my ipod. I love my apartment so I definitely like having friends over where we can control the jukebox and not have to wait for drinks or be pressed up against frat boy types and the gals who love them.

If you could change anything about New York, what would it be? I know it should probably be the rat problem and high rents, but I’d really like to see brunch deregulated so restaurants could be allowed serve Eggs Benedict outside of weekends. How difficult could it be to have The Brunch Act of ’78 repealed? When a community demands change, anything is possible