Tom Otterness, Who Once Shot A Dog For Art, Mocked With New Guerilla Subway Sculpture

In 1977, when he was 25-years-old, artist Tom Otterness adopted a shelter dog, chained it to a fence, and shot it dead for an "art" film he called "Shot Dog Film." In 2008, he apologized, saying, "As you must understand this is a very difficult and painful situation for me. Thirty years ago when I was 25 years old, I made a film in which I shot a dog. It was an indefensible act that I am deeply sorry for. Many of us have experienced profound emotional turmoil and despair. Few have made the mistake I made. I hope people can find it in their hearts to forgive me." Not everyone has.

Still, his bronze statues remain a prominent fixture over the 14th Street and 8th Avenue subway station. And now, for however long it will last, there's a direct response to his dog shooting past, just feet from his creations, and in near perfect Otterness style.

A sculptor, who asked that we keep him anonymous, has just put this piece up:

We'll have more details shortly, and will update when we do. 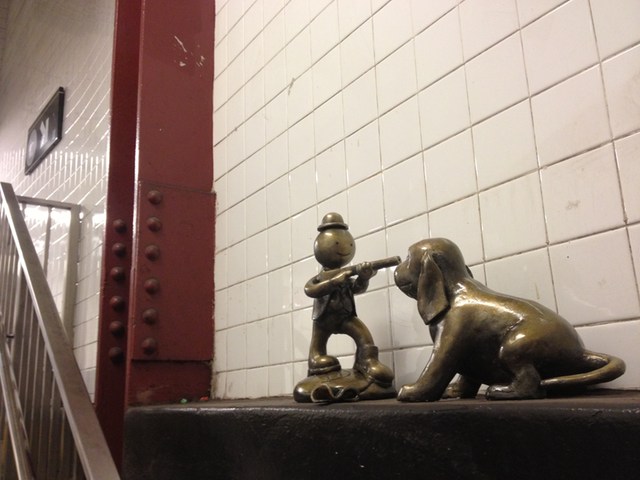 UPDATE, 10:45 a.m.: MTA spokesperson Aaron Donovan tells us that the "MTA crews are removing the sculpture, which appears to be made of plaster."

UPDATE, 11:45 a.m.: The artist (or rather "Brooklyn-based creative"), tells us it is now okay to identify him as Andrew Tider. He has sent us the above photo showing a 3rd sculpture, and tells us he created these with local sculptor named Lisa Barnstone. Here is what he told us about the installation:

"The piece was not really about calling Otterness out for the Shot Dog video. It's about calling him out for not including himself in Life Underground.

Life Underground seems to be about (among other things) corruption and questioning unchecked capitalism. The sculptures I added place Otterness (the shooter figure) within the system that he (as the artist) is wagging his finger at.

I think its important that as we wag our finger at others, we take the time to question our own place in the system(s) we participate in—whether they be a country, corporation or other unit. Otterness seems disdainful of the picture of capitalism he created with Life Underground but is he not a part of that system? Does he not profit from it? (Yes, I know he 'donated' much of the piece—but it serves as an advertisement for his work and generates desire for his work, for which he is compensated quite nicely I hear).

When we examine our role in society, are we proud of our actions each day, or embarrassed and using disdain for the actions of others to hide from our own shame? Could we all be living with greater integrity?

Ultimately, the piece was meant to be personal. I always liked the look of Life Underground and when I heard that Otterness had made the Shot Dog video in the '70s it changed how I viewed the piece. I wanted to do something to make it feel positive for me once again.

With the third sculpture I call myself out as well. The third, small figure who is merely taking a photo of the scene, instead of doing something about it, is a reminder to myself that I am part of this system too and that I sometimes participate in ways I am not fully comfortable with. I hope it reminds me (and possibly inspires others) to make choices that lead to a path we feel fully proud of."

Dapper Dan, a fashion icon whose brand-logo designs during the 1980s caught on among hip-hop stars, says he felt inspired to remove the stigma surrounding hoodies.

By
Kerry Shaw
His job is to pick the Rockefeller Center Christmas tree. It takes all year.

By
Kerry Shaw
7 picks a week: Explore the African diaspora onscreen, see new art and get blown away by a fiery quartet
By
Steve Smith
Beyond Broadway: How to see great NYC theater on a budget
By
Lindsey Weber
‘Lightscape’ returns to Brooklyn Botanic Garden for second season
By
Reece T. Williams
Get the news New Yorkers need in your inbox