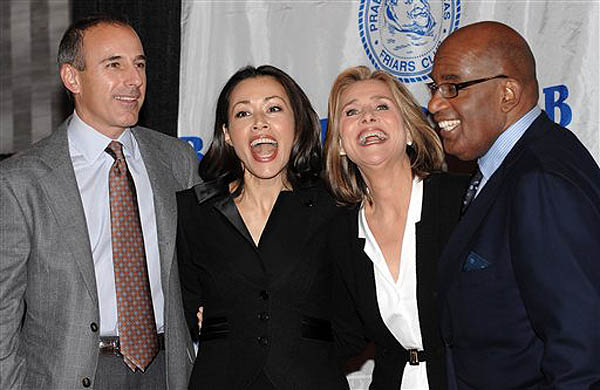 Matt Lauer proved himself once again to have one of the best senses of humor of any TV journalist during his friar's club roast yesterday to benefit arts education and a new journalism scholarship in memory of Tim Russert. But all of the headlines today were swept up by the visit Lauer got from the man on the other end of one of his tensest on-air moments, Tom Cruise.

Cruise, who has needed opportunities like these in order to regain some good publicity ever since his rant against psychology on the Today show three years ago, called out Lauer for his supposed role in everything from recommending that Kaite Couric was better off leaving Today to encouraging OJ Simpson to participate in the Las Vegas armed robbery he was recently convicted of. He then lamented how jealous he was of Lauer's job "interviewing Charles from Knight Rider" and "making five-minute radish puffs with Rachael Ray." 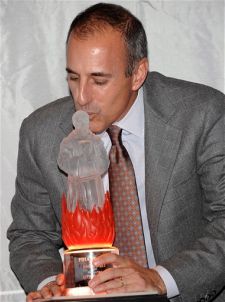 After Roastmaster Al Roker said Cruise had to run off "to his spaceship", Lauer wasted no time in retaliating, asking if Cruise would stay if they got him a booster seat. He then added, "But just between us, if he pulls that shit again, I will fuck him up. The guy is, like, five-foot-three. I will drop a building on his ass."

The roast also featured Friars' staples Jeffrey Ross and Gilbert Gottfried dishing out non-sequiturs at easy targets like Clay Aiken and Aretha Franklin, while Meredith Vieria got potty-mouthed with her dirty housewife alter-ego.

But the surprise performance of the night may have been Lauer's old partner-in-crime, Katie Couric, who came equipped with solid zingers. After taking the stage, she told the crowd, "Wow, I haven't received as much applause since I told [my bosses at CBS] that I was considering leaving." Then she addressed the Cruise confrontation by saying, "How cool was it that Tom Cruise came? Matt, don't worry about that interview. Tom wanted to be the only handsome man in the room who people thought was gay."