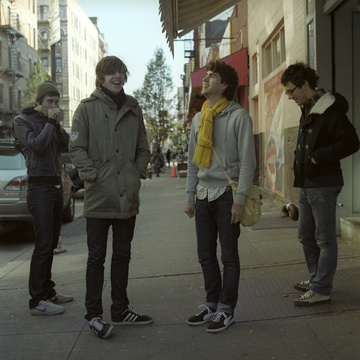 Pitchfork-approved blog darlings Tokyo Police Club have spent the last year and change transitioning from flavor of the month boy band to reputable musicians with an enviable knack for short, hook-happy hits. On Thursday night these clever Canucks will have the chance to further extend their fan base when they perform at the “Woodie” Awards; they’re nominated for a “Breaking Woodie”. Broadcast on the 24-hour college network mtvU, the award show will feature performances by Spank Rock, The Academy Is… and, in the wake of Amy Winehouse’s shocking cancellation, some other recording artist T.B.D. In a desperate attempt to understand just what the hell The Academy Is…, Gothamist will be live-blogging the show from Roseland, just like last year. Speaking on behalf of the entire Tokyo Police Club, keyboardist Graham Wright and singer/bassist Dave Monks responded to our questions via email.

Where were you when you found out you'd been nominated for an MTV Woodie Award? I can't say I remember very vividly, but the chances are good that I was in a van somewhere.

Tell us honestly, did you know what it was? Yes, but I'd only just found out. As a Canadian who never went to University, I was sadly unaware of mtvU’s existence until recently.

What else is new with Tokyo Police Club? We're currently holed up in a rehearsal space, working on new songs to be recorded and formed into a new album. It’s a huge complex of rehearsal spaces, so when we're lucky we get to listen to seventeen other bands all covering Pink Floyd at once, in different keys and at slightly different tempos. Inspiring.

How did you come up with the name Tokyo Police Club? A study was conducted to find out if a band's name can correlate to their success. And so a computer formula took all the results of the study – what words showed up most frequently showed up in successful bands' names – and generated the ultimate fame-ensuring name: "Tokyo Police Club". The second choice was "Madonna Jackson Pac".

Have you been approached to license any of your songs for advertising? I don't know about commercials, but we've lent our music to a few video games. We consider every licensing request, and more often than not we're okay with it. I think the whole notion of 'selling out' is rapidly becoming antiquated. Plus I have rent that needs paying.

Win Butler [The Arcade Fire] was recently pelted with bottles during a concert. What objects have been thrown at you lately? What kind of idiot would throw something at The Arcade Fire? We get off easy, mostly. At one festival there was a whole ton of beachballs flying around; I had fun trying to knock them down with my tambourine without missing a beat. I accidentally pelted one directly into a guy’s face, but he was a good sport about it.

Two days after the Woodies you're going to Brazil to play one concert? How did that gig come about? Are you big in Brazil? A festival there just asked us to come and we were delighted. We are not big in Brazil but we are big on Brazil (and going there to play).

If you could take 3 CDs with you to your desert island, what would they be? Big novelty inflatable CDs. I would store food in one, water in another, and then, because I still have room in one, I would bring my three favorite CDs: Kid A, Is This It?, and Funeral.

What's the strangest fan interaction you've had so far? In Pomona we met a bunch of very nice fans and had good conversations with them. But then when we started to load out gear and pack our trailer, they stood in a silent semi circle, watching us try to fit everything in the trailer. It was like giving a demonstration on the most efficient way to pack instruments into a small space. I think that was more nerve-wracking than the show itself.

What was the first venue you played in New York and what do you remember about that show? We played at Mercury Lounge, in front of maybe 15 people. At the time we were really excited at what we thought was a really good crowd. I don't remember much about the show, but the next day we got Jamba Juice for the first time, which was a life changing moment for me. Damn, Jamba Juice is great.

Is there any place in New York you look forward to going to every time you're here? Corner Bistro. I've been told that there are better places to get burgers, but for me nothing beats cramming into a booth at 2:30 in the morning with all my friends and getting a big greasy burger and fries on a paper plate. One time we saw a guy shoot a little bottle of Tabasco sauce there. It was awesome.

How about your wildest "only in New York" story? Uh, does the Tabasco sauce thing count?