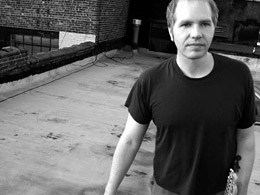 Every Monday night music nerds come to Pianos for an evening of trivia. Todd Satterfield is the man behind the questions, hosting three rounds that will make you wish you didn't kill so many brain cells at those rock shows. Garner all your knowledge and head over there tonight to get schooled by the authority on all things rock and/or roll.

How did Smartass Rock Trivia begin?
SmartAss began in 2004 one night as I was djing at Belly on Rivington. The bartender and I were suffering a miserably slow Tuesday night and we decided something had to be done. Apparently our sparkling personalities weren't enough to bring people in so we thought a rock trivia night, a really good one, was not to be had in the LES and we could fill that gap. Thus, SmartAss was born. Belly closed and became St. Jeromes and the owners didn't want a rock trivia night, so they said, then they had their own, is that even still going?? Now we're at Pianos, who welcomed us into the family much to our happiness. They've been really great and supportive and we've made great friends there. By the way, we also list the winners for all to see weekly at our blog.

What can a first timer expect -- what sort of questions?
We try not to make the night a complete geekfest in that you will be challenged but not to the point that you wouldn't be able to get the questions right. We ask hard questions, but we throw bones just to keep things interesting. Also expect a lot of drinking and laughs. Comedy is definitely part of the night.

What's the hardest question you've ever asked?
Hmm,..after three years of the quiz, that might be the hardest question I'VE been asked. Probably this one, What Motown artist received a gold record only to discover it was not only just SPRAY PAINTED gold, but actually a Supremes album? Marvin Gaye

Has anything totally crazy ever happened on a Monday night at rock trivia?
Yeah, me being able to actually DO the quiz after 5-6 vodka sodas. Thankfully, there hasn't been too much craziness, fights about scores never happen.

Opinion question: Best NYC album cover.
I always loved that Supertramp cover for Breakfast In America with the NYC skyline made out of breakfast dishes.

What brought you to NYC, and when did you move here?
I took a train here from Toledo OH.(I'm actually from Gadsden AL.) in 1998 to begin an advertising career and to continue my musican shenanigans. The music part was WAY more fun.

Please share your strangest "only in New York" story.
Probably when I met David Lee Roth and I told him he was a hero of mine and he told me I had low standards.

Given the opportunity, how would you change New York?
Stop the assault on the NYC nightlife. Let people smoke in bars again, encourage more support for the local music scene. It's horribly underrated and sadly unsupported.

Under what circumstance have you thought about leaving New York?
Everytime the F train won't run because it's rained. I mean, rain??! Really? Really? Also, everytime I visit California, except for LA. When I'm there I miss NYC terribly!

Can you please recommend a good weekend hang-out that isn't unbearably mobbed?
That's a tough one. Gowanus Yacht Club? Union Hall is pretty bearable on the weekends too.

What's your current soundtrack to the city?
The National, The Forms..been listening to old Police a lot lately since they've been touring. Anyone got an extra ticket for the Halloween show??

What's the best subway line?
People say the G sucks, but it's the handiest train in 5 buroughs for me. I can get across Brooklyn quickly and get to Queens, not that I actually GO to Queens very often. Actually, come to think of it, I have to go there today to record some Spanish guitar for a short film. I'll be taking the G.

Favorite headlines: NY Post or Daily News?
Post, hands down, always good for a laugh. What are those people on??

Yankees or Mets?
Who is this Mets team you speak of??

Best cheap eat in the city.
Snack Dragon in the East Village. Best tacos on the East Coast.