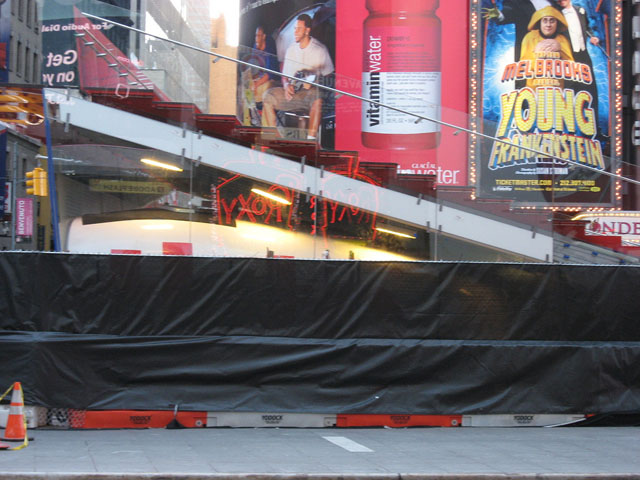 File this one under unsurprising: The shiny new TKTS booth in Times Square that's supposed to finally open this month over 18 months late is also way over budget, the Post reports. The ambitious new discount theater ticket outlet, which features an all-glass skin with an amphitheater-style roof (pictured) and "a shimmering and floating carpet of color and light," has cost 100 percent more than its original $8 million estimate.

When the renovation of Father Duffy Square and the TKTS booth was announced in 2004, the Times Square Alliance estimated the $8 million price tag would require $1.4 million from the city. According to the Post, taxpayers ended up shouldering $11.4 million of the total $19 million price tag. But the alliance says the tabloid is misleading people, because when they broke ground in 2006, the estimated budget was then pegged at $12.5 million, with $9.5 million promised from the city. In a statement sent to NY1, alliance officials stress that in 2007 the city allocated only $1.5 million of the total cost overrun of $6 million. (The Times Square Alliance paid for the rest.)

Nevertheless, at least one Times Square Alliance board member is outraged at the delays and overruns, telling the Post that the group's president, Tim Tompkins, is to blame: "The Chinese were able to build the Bird's Nest Olympic stadium in three years, and it has 500 times the physical space. It's taken Tompkins two year to get TKTS done, and all we're talking about is a tiny little space with a bunch of benches." True, but does the Bird's Nest sell cheap tickets to Jersey Boys?