TKTS Booth Stalled, Planner Hangs Up on Calls for Info 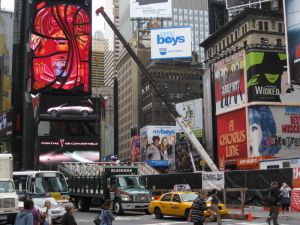 Remember the plans for that fancy new TKTS theater ticket booth in Times Square that were unveiled back in Aught Six? Producer Ken Davenport (Altar Boyz) does, and the other day he was just wondering, you know, why the hell it’s not ready yet, since they originally said it would be open for business in just six short months. (The Times Square TKTS has been operating at the Marriot Marquis in the meantime.)

So Davenport rang up the construction manager to get some answers, and was told to call Ellen Goldstein, the VP for Policy, Planning and Design at the Times Square Alliance, which is overseeing the redesign of Duffy Square, home of TKTS. Here’s how that inquiry was handled:

"They tell everyone to call me about this. I'm not the right person to talk to about this."

We know all this from Davenport’s blog, and it’s a good reminder of the annoying fact that pretty much every person you interact with in life has a blog. Goldstein’s boss, the president of the Times Square Alliance, later left a comment on Davenport’s post apologizing for Goldstein, whose conduct he deemed neither "appropriate" nor "professional." We called Goldstein this morning just to see if we could piss her off, but apparently she’s starting her week on the right foot, as she politely transferred us to one Minerva Martinez. Who didn’t pick up.

As for the new Duffy Square TKTS, the Post reported at the start of June that it would be open on the 20th. Now maybe by the end of the summer, per Davenport’s subsequent conversation with “the Boss.” In the meantime, there’s a new TKTS opening in Brooklyn next month, the temporary one at the Marriot Marquis, and one at the South Street Seaport. So go get cheap Passing Strange tickets already! [Via What’s Good/What Blows]

Photo of TKTS construction from earlier this month via this informative Wired New York discussion.