The dream playoff run for the Red Bulls continues. Coming just 72 hours after their play-in round win over Kansas City, what should have been a tired New York squad had no trouble with their rivals DC United. Two goals sparked by Thierry Henry handed the Red Bulls a 2-0 aggregate lead heading into the second leg next Saturday.

Henry leads a blistering attack. There's at least one moment during each match where our eyebrows raise, we shake our head a little and think "We're going to miss Henry when he's gone". Sunday night, it was this backheel, which Peguy Luyindula smartly let drift on to a wide open Bradley Wright-Phillips for the opening goal:

In the final days of his contract with the Red Bulls (and continuing to swear he'll make a decision after the season is done), Henry was in top form, pressuring defenders, unleashing skill moves like he was playing FIFA, and making ridiculous passes like this one to Peguy Luyindula for the second goal:

Henry, subbed off at the 80th minute to cheers of "ONE MORE YEAR!" from the South Ward, wasn't the only danger man on the night. Peguy Luyindula's continued his revived performance as an attacking midfielder, and Lloyd Sam terrorized DC United up and down the right flank for 90 minutes. 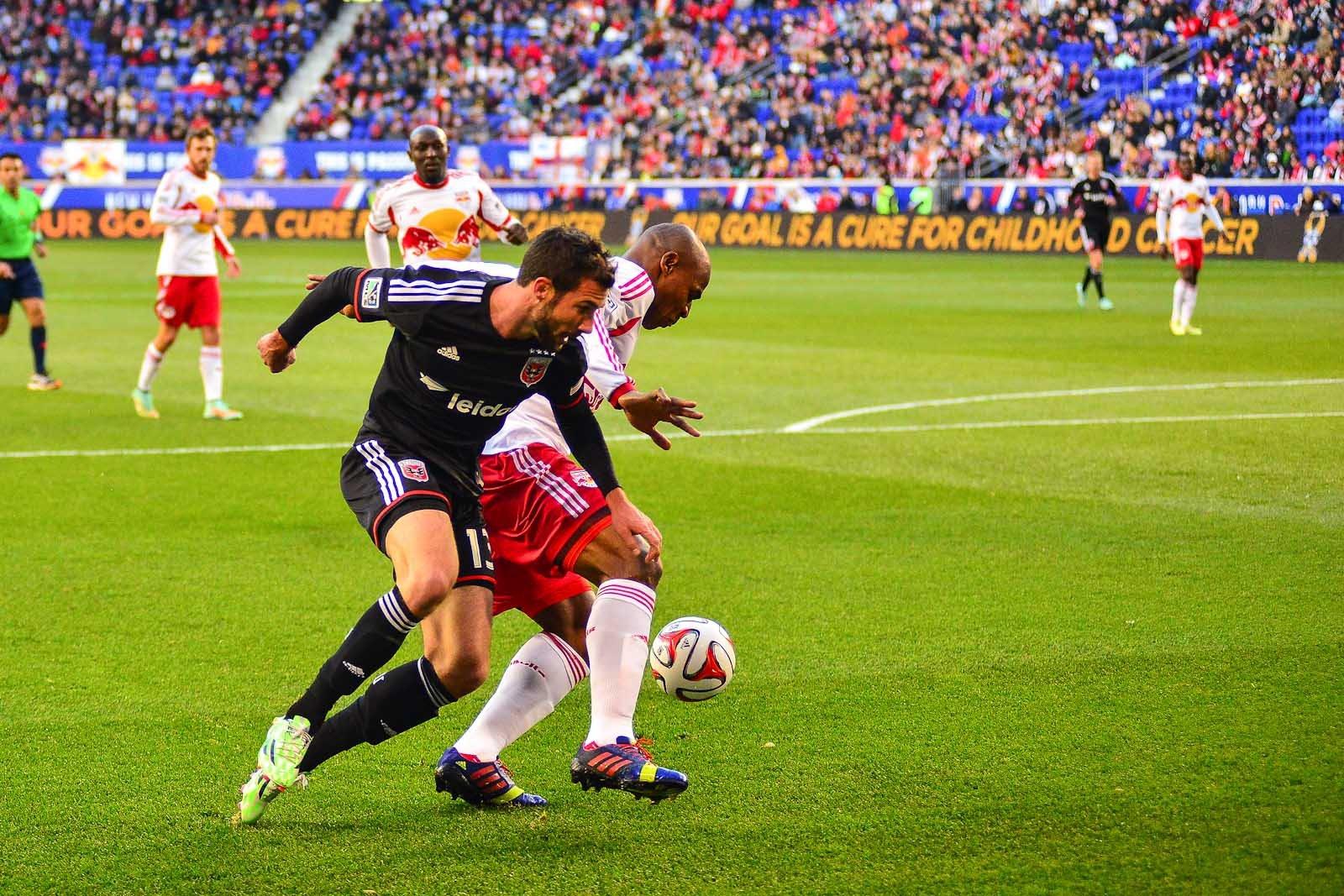 The clean sheet matters as much as the goals. With MLS implementing the "away goals rule" this year - making away goals a potential tiebreaker if the aggregate score is level - keeping United off the board was pivotal. D.C.'s attack partnership of Fabian Espindola and Eddie Johnson tried to pressure New York's defense to start a counter, but neither would get a shot on target the entire night. Jamison Olave seemed to take particular joy in getting inside Eddie Johnson's head, and put in a second consecutive dominant performance.

D.C. looked disconnected. A casual observer might be confused which team was the one coming off a short turnaround and which one was rested. United was effectively played off the field, with midfielder Chris Rolfe reflecting it was their "worst game of the year".

More history was made. Days after winning their first home playoff game at Red Bull Arena, the win over United is the first time in five all-time playoff series that NY has downed DC in regulation. The only previous win was a shootout victory in the very first meeting all the way back in September 1996.

"Halftime" cliche goes here. As Thierry Henry has made his mantra during the post-season, New York hasn't won anything yet. The second leg of the match comes Saturday at RFK Stadium, and while a 2-0 lead is significant, it's not insurmountable. Mike Petke will need to continue to focus his team on maintaining the strong mentality that's kept them from stumbling so far in the post-season. And despite the option to play for a draw with that lead, an away goal would put the match the series almost completely.

Coach Mike Petke on where the team found the energy: "You’ve got to ask them, to be honest with you. I’m proud of them. It was definitely a concern, but you’re right they looked pretty energized in the second half. I think that they understood that we wanted to keep a clean sheet tonight, but the more goals we put in puts us in a better situation. I think they were really pressing, I think Dax, Eric and our back four did a great job of holding down the fort behind. At times, especially 2-0 up, Eckersley is still bobbing down the wing and I’m screaming at him, 2-0 is a good result, so let’s be smart here. Overall, they showed it, especially in the second half. I’m the same way as you, asking where’d they find the energy, but now we have a week off, so hopefully we have the energy to be there for 90 minutes."

Luis Robles on Thierry Henry: "It is pretty incredible as a spectator to see what he’s doing at 37 years old and as a teammate you just really appreciate those moments because not only is he a huge part of what we are trying to accomplish here, but he’s been doing this for four and a half years. So we’re hoping that we can kind of just get on board and help him get to where he wants to get and I know that he has a huge decision in his future, but that’s for him to decide. Right now we’re playing so we don’t have to worry about that and we’ll hopefully continue to play and let him postpone that decision as much as possible."

DC United Coach Ben Olsen on the result: "I think New York put a whooping on us. They were very good, and we weren’t."

Thierry Henry reminding you it's not over: "We’re not there yet, so it’s kind of a mixed feeling because you’re obviously happy because you won and you’re going to go over there with something to defend. I’ve been in some times before in my career where everybody thought that maybe we were out, or maybe we were going through and then it didn’t happen. We have to relax; they have showed this whole season that they are a good team. We took care of business at home and I expect them to try to do the same thing on Saturday. Like I said to you, it’s always better to go out there with something to defend, but we haven’t done anything yet."

#dc united
#mls
#red bulls
#soccer
#thierry henry
Do you know the scoop? Comment below or Send us a Tip