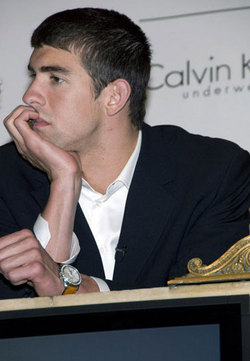 Yesterday there was some excitement on the part of a certain Saturday Night LIve cast member about Michael Phelps hosting this weekend's season opener. However, the NY Times insinuates the athlete may be a bit too tuckered out from the excessive amount of travel he's been doing on a press tour, to deliver a 1st place performance. Oprah appearances! Touching strippers in Vegas! "Wooden introductions" at the VMAs! Ringing the opening bell at the NYSE! Oh my, oh my. Surely the shiny new eight gold medals and $1.6 million advance to write a book make it all worth it, but everyone is asking how he'll do on Saturday.

“I’m more excited than nervous,” said Phelps, who was hoping to squeeze in a three-hour nap before attending his first S.N.L. production meeting Tuesday afternoon.

Phelps’s friends seem unsure about whether he can deliver a winning performance in front of a live studio audience. They knew his earnestness played better in front of small audiences even before his wooden introduction of Lil Wayne at the Video Music Awards. “All my friends are like, ‘Yeah, you’re either going to kill it or you’re going to whiff it.’”

Reportedly, McDonald's-eating Bronze medalist Ryan Lochte will also be on the small screen this weekend, but he's being portrayed by an SNL cast member--he told the paper, “I bet it’s Andy Samberg. I could see that. That would be good.” As for Phelps, he finally gets to go home to Baltimore after his hosting duties are over on Sunday.

Photo of Phelps at the NYSE via WireImage.