It's that time of year when New York's "creative types" head to Texas to bake their translucent skin in the sun, daydrink and make many, many obnoxious tweets about tacos, all under the guise of "work." Or as one Austinite puts it, "South by Southwest is when 6th Street turns into Bedford Avenue and is just about the only time I consider moving out of Austin (besides ACL)." So BE COOL, people. The key to being cool is blending in, so you'll need these tips from former New Yorker/current Austin resident and Emo's Head Talent Buyer (if you don't know what that means cancel your flight) Jack "Skippy" McFadden.

1. Rent a car or bike this year or make friends with the bus. In years past, it made sense to stay near 6th Street, but this year will mark an obvious shift to other cool neighborhoods, notably the East Side. From the 29th Street Ballroom (to the North) to Frontier Bar and Emo's (to the east) to Whip In (to the south), you should be covering a ton of territory this year. Also, taking 20 minutes to get somewhere will sober you up so you can stay the course during this crazy marathon!

2. All the great bars are on the East Side. [Ed: This is true, with the exception of Lovejoy's] Hopefully not all of them will have music, but most will. Rio Rita, Shangri-La, The Grackle, The Liberty, Yellow Jacket Social Club, The White Horse, they are all worth taking a quick time out from seeing bands and downing a shot. Same goes with the Rainey Street scene (one block from the convention center) which has blown up since you were last here. Clive, Bar 96, Lustre Pearl, Icenhauer's, it's pretty fun over there and there's a tiny secret mezcal bar at one of those places (I'll let you figure out where). 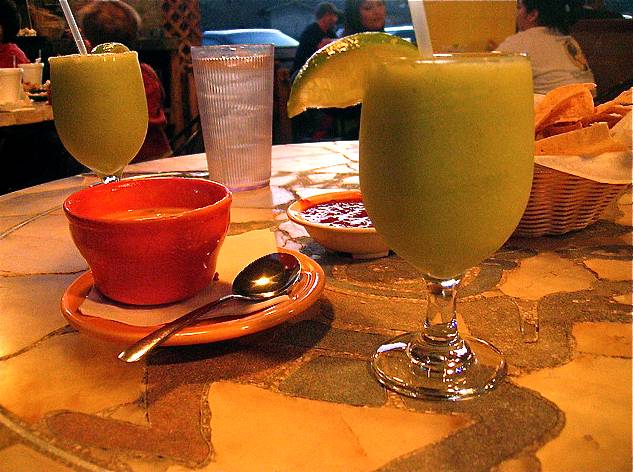 Get the avocado margarita at Curra's! (Photo by Jen Carlson/Gothamist)

3. The food scene blew up here a few SXSWs ago and its spawned some fantastic places to eat. The East Side Kings have it figured out, but also, do not miss the newish Contigo, Uchiko (and of course Uchi), J Mueller BBQ, Barley Swine and Justine's Brasserie. If you want tacos on the cheap and fast, Torchy's rules supreme and Izzoz is solid. I wasn't super impressed with Papi Tino's, maybe you will be or you'll be smart and go to Curra's instead. There are still no really yummy options on 6th Street, so plan to wait a long time for mediocre food or get off the beaten path. [Ed: We'd add Juan In A Million to this list for greasy, breakfasty bliss.]

4. The local brewery scene has blown up. I'm partial to the Austin Beerworks Fire Eagle IPA or their Pearl Snap, but 512, Real Ale, Independence, Live Oak.... you should be able to get most of these at any Austin bars. They are all worth seeking out.

5. Jump in the drink. No, the pool. Barton Springs is open late and costs like $3. It's totally worth it. [Ed: A bit further out you'll find Hamilton Pool, well worth the visit.]

6. Coffee, you'll need it. Progress, Jo's, and my personal favorite, Once Over, are all aces and you should go out of your way for the good stuff instead of slumping over to Starbucks. 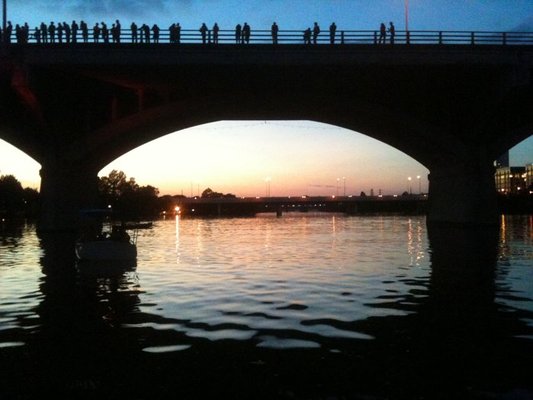 8. At dusk, yes, you can see 1 million bats come out of the Congress Avenue bridge, but if you trek up to Mt. Bonnell, you can see the entire city, in all its glory. It's super romantic, so bring a bottle of bubbly and a date.

9. If it's hot, you'll need some ice cream. Lick on S. Lamar is awesome (Amy's is great too, many locations). Not Humphry Slocombe awesome, but pretty great. Some of my favorite businesses are on S. Lamar, a strip I practically ignored my first several SXSWs. Broken Spoke is a dance hall, Red's Porch has good fried chicken tacos and views, Horseshoe Lounge is my favorite bar, The Highball offers karaoke and bowling, Alamo Drafthouse rules, Lulu B's (yummy Banh-Mis) the aforementioned Barley Swine (eats) and Half Price Books (records/books) are on this strip too.

10. Relax, have a great time, and bring sunblock, it's already 80 degrees here!

#austin
#jack mcfadden
#Music
#skippy
#south by southwest
#sxsw
#tacos
#texas
#tips
Do you know the scoop? Comment below or Send us a Tip