Times Weddings Highlights: Sure You're Married? 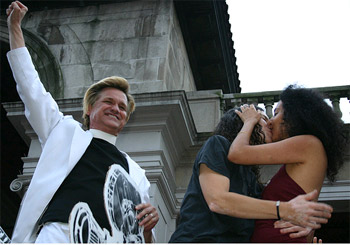 Customizing your wedding is standard these days, and wedding planning businesses aren't the only ones who are benefiting. There's been a boom in people applying online to be ordained to officiate friends' and families' weddings. But there's an unexpected catch: Sometimes those Universal Life Church ordinations aren't legal in the county or state where the wedding is being performed!

The NY Times has an article about the issues with ordained-online ministers. One couple, a lawyer and a law student, had no idea their Connecticut wedding performed by a friend (they preferred a friend to officiate) wasn't legal, because Connecticut doesn't recognize Universal Life Church. The St. Louis County's wedding license department's Elnora Douglas was skeptical about online officiants, saying, "It’s like you want your favorite cousin to do a surgery, so they go online to get a medical degree."

A tip if you're going the online-ordained officiant path: Contact your local marriage bureaus to find out what the legal requirements for marriage are; check and double-check. The NY Times notes that it checks to make sure the officiants mentioned in wedding announcement submissions are legally allowed to marry people! And with that, here are highlights from this week's NY Times Weddings & Celebrations: