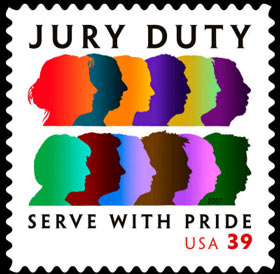 There are lots of great stories about how couples meet. Kindergarten, the Peace Corps, a subway platform, by chance at a bar, you name it. But we love this Daily News story about how one couple met, because it appeals not only to the romantic in us, but to our respect for jury duty: Traci Nagy and Jonathan Cinkay met while serving on the same jury during a Queens murder trial. A fellow juror told Nagy "I thought you should date John," and Nagy explained to the News, "We were in the jury room so much and we weren't allowed to talk about the case. We talked about movies, travel, everything. It was a very good way to get to know someone."

In fact, the judge, Queens Supreme Court Daniel Lewis, who presided over the murder trial will be marrying the couple next month! Nagy and Cinkay's wedding program will have a note, "A thank-you to the criminal justice system."

And here are some highlights of this week's NY Times weddings announcements: