Times Weddings Highlights, Plus Some Others 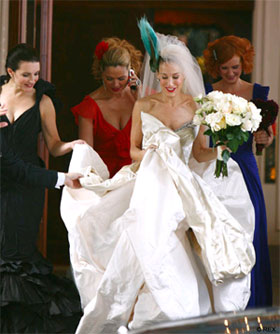 This past week, the big wedding wasn't even real! According to the many paparazzi photographs of the Sex & the City movie filming, it seems that Sarah Jessica Parker as Carrie Bradshaw is finally stepping down the aisle. With, we assume, Mr. Big. The wedding between the fictional sex columnist-turned-author and the rich business guy (it's never been totally clear what Big does, except smirk and show up at the right and wrong times) took place at St. Patrick's Cathedral. The bride wore Vivienne Westwood, her bridesmaids did not wear matching bridesmaid gowns. We'll know more when the movie comes out next year.

And a big spots wedding really did take place yesterday: Yankees rookie pitcher Ian Kennedy married USC basketball player Allison Jaskowiak last night in St. Louis, Missouri. Kennedy was not included in the pitching line-up for the first round of the playoffs and it's unclear whether his season has ended (that depends on whether the Yankees can come back to win three games in a row against the Cleveland Indians), but he and his bride did walk down the aisle to "Take Me Out to the Ballgame." According to the AP, Kennedy said, "I was thinking, what's more nerve-racking, pitching in the big leagues for the first time or getting married? It's a different emotion. I don't cry too much, but it was emotional.'" Sadly, none of Kennedy's Yankee family could make the wedding because they were playing an 11-inning game on Friday night, but Jaskowiak's USC coach and some teammates attended - and their first practice is next Saturday!

And here are some highlights from the NY Times' Weddings & Celebrations: