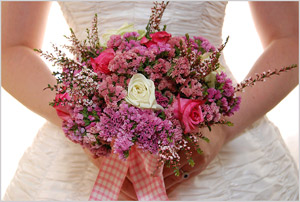 Aha! We were right when we suggested that August 8, 2008 might be another coveted wedding date to consider, now that July 7, 2007 has passed. The date 08/08/08 is considered very auspicious by Asian cultures (in fact, the 2008 Olympics in Beijing will start on that day), and some weddings planners who specialized in Chinese weddings are seeing a big rush. One told LJWorld, "We like to do three weddings max a day, but we might end up doing four to five because of this hot date."

Another benefit to August 8, 2008 is that it falls on a Friday, which is usually less expensive than Saturdays when booking reception spaces. We're not sure the numerological benefits of September 9, 2009, but anyone interested in super long engagements, we're calling this now: Sunday wedding on October 10, 2010.

And here are highlights from this week's NY Times Weddings & Celebrations: