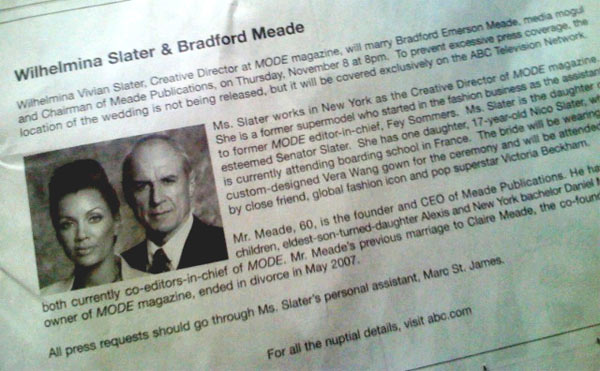 There have been a few ads in the NY Times weddings section that spoof the real wedding announcements. For instance, we believe we recall a few for divorce services, but less ironically, there have been ads for marriage-related movies, like The Starter Wife. And this week, there's an ad for an upcoming wedding on the ABC comedy Ugly Betty. Of course, the ad is a lot wordier than the usual NY Times wedding announcement, but any mention of Wilhemina assistant Marc St. James is worth the extra ink.

No word if the Sex and the City movie will advertise its wedding when the movie comes out next year. And onto this week's NY Times Weddings & Celebrations: