Times Weddings By The Numbers: Divorce For Sale 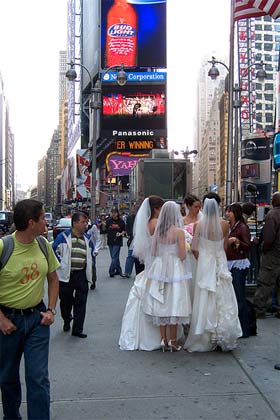 We all knew the real estate bubble was causing insanity, but we should have known it's encouraged people to divorce. There's a NY Times Styles section article about some who wait until the market's at its peak to divorce - that way, they can benefit from an even bigger profit when selling their homes.

A wedding story we liked better was the Times' Thursday national article about Donnie Andrews and Fran Boyd. Andrews is the basis for the Omar Little character in the HBO series, The Wire, while Boyd's drug addiction was portrayed in another HBO mini-series, The Corner. They have spent the past ten years helping each other overcome their difficulties (they met when Boyd was in prison) and were married yesterday. Their pastor said, "Donnie and Fran are a street version of Cinderella and Prince Charming, but when they fell in love they didn’t have any magical dust in their eyes."

And here are highlights of today's NY Times Weddings & Celebrations:

Photograph of a bevy of brides by Ozzdo on Flickr