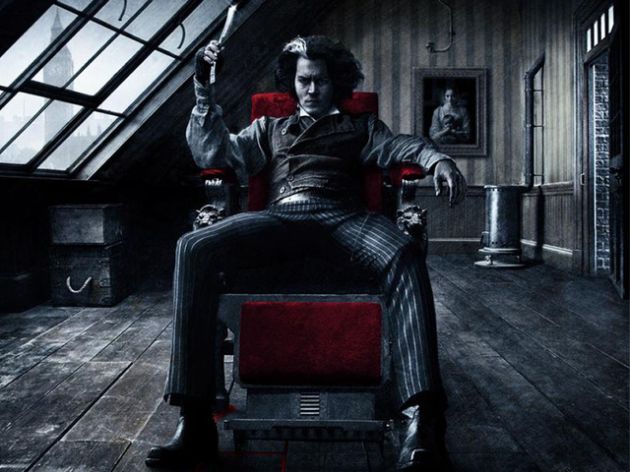 On Wednesday night Tim Burton gave the Film Society of Lincoln Center a 17-minute taste of Sweeney Todd, his film adaptation of Stephen Sondheim’s macabre musical. The 1979 Broadway hit was inspired by Victorian folklore about a crazed London barber who slits his customers’ throats and, in some versions of the story, colludes with his lover to bake the corpses into meat pies – which become wildly successful! (Ah, the culinary possibilities before rogue Health Inspectors ruined the restaurant business.)

In Burton’s version – which Sondheim assisted and approved – Johnny Depp plays the bloodthirsty barber, Burton’s fiancé Helena Bonham Carter plays Todd’s baker paramour, and Alan Rickman and Sacha Baron Cohen appear as potential ingredients. Before screening the excerpt Burton discussed the film backstage with Tom O'Neil from the L.A. Times. (Hear the full interview.) He revealed that the film has 26 songs and is about “70 to 75 percent singing and 80 or 90 percent music — more like 90 percent,” which suggests a fidelity to the source material that should hearten the Sondheim purists – his version is almost entirely sung.

But as Burton concedes, “practically everybody in the film is not a singer and it’s one of the hardest musicals to do.” O’Neil raved about the excerpt, predicting an Academy Award for Best Picture and insisting that Depp “nails” the singing, “not magnificently like Tony winner Len Cariou… but he's no Lucy Ball butchering Mame.” Jeffrey Wells hasn’t seen the 17 minutes, but he cuts O’Neil down to size:

I think that screening a short "sizzle reel" at this stage of the game indicates obvious caution and bet-hedging on the part of the film's marketing strategist Terry Press (who ran last year's Dreamgirls campaign). You can make almost any movie look fairly momentous if you cut together a short-enough reel. I was boondoggled myself once with a 30-minute reel of a new film. It's happened often enough that it's come down to a very simple equation by way of a very simple mythology: short promo reels = film-flammery.

Anyone at the Tim Burton event care to comment? The rest of us won’t see more than the trailer, currently in theaters, until Sweeney Todd’s release on December 21st. In the meantime, there’s always the superb filmed stage version from ’82 with Angela Lansbury.