Tilly and the Wall, Indie Rockers 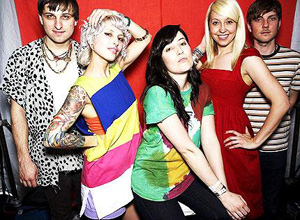 Tilly and the Wall is best known as the indie rock band that has a live tap dancer onstage performing the bulk of their percussion. After three well-received albums on Conor Oberst's Team Love label and a live show that has earned them a reputation as one of the more exciting acts to see on the indie circuit, they've proven themselves as more than a novelty act. Tilly will be playing two shows in New York, tonight at the Music Hall of Williamsburg and tomorrow at the Bowery Ballroom. Keyboardist Nick White took some time to talk to Gothamist as the band was heading up to New York yesterday.

Tilly and the Wall is known for putting on quite a spectacle with your live show. Someone recently likened attending one of your shows to "going to a kid's birthday party." Is it true there's even confetti being shot on this tour? Yeah, we have these confetti poppers now. They're pretty sweet. We try to make it a bigger spectacle every time. So now we have a huge riser for the taps, glittery backdrop, and a big light show. We even have a helium tank traveling around with us.
It's nice to break people out of the habit of going to an indie show and just standing around with their arms folded. That seems to be changing a lot though. Putting on a big live show was one of our main things when we started as a band. But now I feel like a lot of bands have really fun, big time shows that are also entertaining to watch.

You guys recently shot a video that's going to air on Sesame Street this fall. How did that go? That was awesome. We went to the studio and filmed it with these really sweet kids that were all around three to six. We did the Alphabet Song and they had little t-shirts where they each had a different letter on the back in order. So one person would have A and B and the next would have C and D. And they would do the alphabet and would flip around as the alphabet jumped around.

Do you have a favorite Sesame Street character? I don't know. I like the one in the trash can because we travel with a trash can too. We keep our maracas in it.

Are you guys looking forward to getting two days in New York? Definitely. We always kind of stay in similar areas. This time I might go up to the Whitney Museum. I've never been there.

Have you had any crazy New York experiences on your other visits here? Any time you're wandering the streets at New York, it's colorful. But we're always drunk so I can't remember.

Can you tell me about the Telefono Project you recently participated in? My buddy David Matysiak, a friend of mine since high school had a residency at Omaha's Bemis Center for Contemporary Art and wanted to make this super interactive music project. He finally settled on this idea of a musical game of Telephone, where he starts something and passes it along. The person who gets it could do whatever they want--totally erase it and start over or be inspired by that, add to it, or use parts of it. The one I ended up doing was all people from my high school which was really fun.

It was weird cause I'm not a home recording person, ya know? And I did it on GarageBand, that was my first time using it. It was super fun. It's gonna keep getting passed around. It's still moving. He's gonna make final box sets every now and then. He's made one already and he'll continue to of the current stage of different songs. The one I did is on the one that's out now and the next box set might have a totally different version of the same song.

This album (o) has a darker sound in both its music and lyrics. Was that a conscious effort to play against your established image? It goes a little further than we went on the other albums on all levels. We really tried to step out on a ledge a little bit and change things up. We tried some different sounds and different emotions. Some of the songs are definitely a little bit angry and some of them are similar to are other albums.

I think we were just a lot more comfortable in the studio and that just helped us be a little more daring with what we did and try some new things.

If Tilly and the Wall was going to be on a TV show soundtrack, which would it be?

Dexter. It's such a great show. I feel like it'd be a good fit for the band. Obviously it's a show about a serial killer, but it has a good sense of humor about itself.